My invitation of military not to crush Orlu people ― Uzodinma 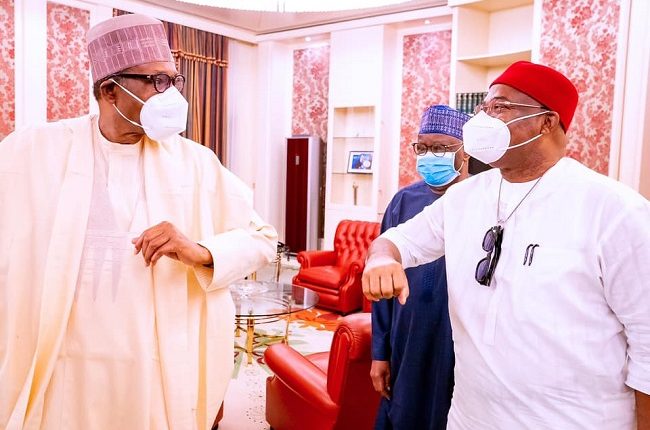 Governor Hope Uzodinma of Imo State has defended his involvement of the military in the recent crisis in Orlu, rejecting insinuation that whereas some of his colleagues are negotiating with bandits to solve their insecurity problem he preferred to use military might on his people.

Speaking to correspondents after a meeting with President Muhammadu Buhari at the presidential villa, Abuja on Tuesday, he said his invitation of the military in the crisis was not to crush the people.

Asked why he preferred the application of military force instead of negotiating, he said: “Well, I don’t know what you mean. I told you that our initial intelligence and the efforts to control the sporadic shootings in Orlu that led to many deaths, innocent women in the market, people selling food foodstuffs dead by a group of people that we were not able to identify.

“Preliminary intelligence reviewed where they were in a bush. Our local police and local military went there and confronted, were repelled.

“So, we discovered that people had serious firepower. And that, of course, Nigeria, is a federation, Imo State is a federating unit, and all over the world, you have provincial police, you have federal police. So, there was a need for me to report the situation and that I did and we were supported to deal with the situation.

“It is not about crushing anybody and those that came didn’t do any crushing. Those that came through their intelligence identified where these people were and I can tell you, all the people arrested, all the rifles recovered are intact. The people are under interrogation, not even one, not even one soldier, or one of those militants died in the process.

“I must commend DCP Abba Kyari for the brilliant job he did. So, let anybody politicise it. But I have a responsibility to protect the lives of my people.”

Uzodinma explained that he invited the military because of the experience for the #EndSARS protests, which he said led to the destruction of properties.

He added: “Well, the issue of bringing the military to Imo State? You recall, during the #EndSARS protests, a lot of properties were damaged in Imo state, police stations were burnt down, soldiers were killed, their rifles removed from them.

“And immediately after the #EndSARS, we thought it was over. Then, issues of kidnapping, where you know, a Catholic bishop was kidnapped, who was killed. And this militants came out and begin to shoot. We’ve lost lives, market women were killed, old women were raped in Orlu area of Imo State and they visited this serious terror on the citizenry.

“And I came here (presidential villa), pleaded with Mr President for his support and he sent additional support by sending in police and the military also came in. And that is where we are.

“It was at my invitation that the military came. And I did that because I know the situation was beyond the local arrangement, we needed help. And the help was given to us.

“And as I speak to you the situation has come down to normal, people are now going about their businesses. And those caught will soon be charged to court. And all those military rifles from the army, the police, AK 47, and so on, were recovered by the people that came.

“We are a government, it is our responsibility to protect lives. And while we have the Nigerian Army, Nigerian police. We had security challenges, we invited them to go to work.”

On his meeting with the president Tuesday, he said he informed Buhari about the progress on the effort to tackle insecurity.

He stated: “Well, of course, I informed Mr president that we are already making progress. And of course, you know, President is a very peaceful man.”

On his confrontation with former governor Rochas Okorocha, Uzodinma denied that there was an attempt to assassinate his predecessor in office.

The governor explained: “Who will assassinate him? I don’t know about any attempt to assassinated Okorocha. Rather, what I know is that I have no personal issues with Okorocha.

“You will recall that before I became the governor, the Ihedioha administration set up a judicial panel of inquiry to look into acquisitions and allegations of lands, converting government lands to personal property, and then removing private lands from individuals and giving to other individuals.

“The judicial panel of inquiry chaired by a judge met and they concluded our job and a white paper has since been raised.

“You know institutions and agencies that are involved with implementation are doing their job.

“And the only thing I know is that a few days ago, one of the properties sealed by the government, the former governor, went with his thugs. You people saw it, it was live. He went there with thugs himself physically, wounded the policemen there, wounded the Civil Defense Civil people, the Civil Defense officer is currently still in the hospital and then broke in and entered.

“The government of Imo State sealed a property. And I think that if there is anything anybody considers that is not right, the person should go to court to address the issue. Not to take laws, take to self-help.

“I remember that under Ihedioha, there was a recovery committee, chaired by one Jasper Ndubaku. When they tried to visit Okorocha’s house, they were beaten to a stupor. And the same man who did that is now also doing the same thing and almost killed the man who did it during his time.

“So, I don’t want to go into that matter, because the government is serious a business, and I’m very serious. I don’t have enough time to run the affairs of the state.

“But people should know the difference between being a governor and the government decisions and policies.

“And, you know, we took an oath to protect the rule of law, to protect our laws, and we shouldn’t be part of any arrangement to violate our laws.”