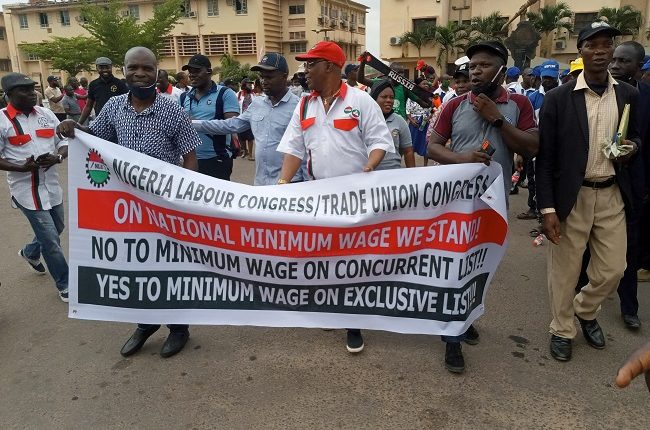 Officials of the Oyo State’s executive arm and its legislative arm have said the state government will not be a party to any anti-workers/anti-people/anti-masses bill.

Special Adviser to Governor Seyi Makinde on Labour Affairs, Mr Bayo Titilola-Sodo, and Deputy Speaker of the state Assembly, Honourable Abiodun Fadeyi, made this declaration when the Oyo NLC and TUC led a protest against a move from the National Assembly to transfer the national minimum wage from exclusive legislative list to concurrent legislative list, on Wednesday.

When the protest train arrived at the state House of Assembly, Oyo NLC Chairman, Kayode Martins, and his TUC counterpart, Emmanuel Ogundiran, stressed that transferring the national minimum wage to the concurrent legislative list was tantamount to returning Nigerian workers to an era of receiving slave wages and being subjected to terrible working conditions.

Noting that the unions were in a fight for the survival and livelihood of workers, they appealed to Governor Seyi Makinde and the State Assembly to refuse assent if the bill is transferred to the state from the National Assembly.
Kayode Martins said, “The implications of transferring minimum wage from exclusive legislative to concurrent legislative list include that it is a licence for state governors to drag the country to back to the era of ridiculous slave wages which in the past precipitated a multifarious industrial crisis in different parts of the country.

“It could lead to exclusion of the private sector from the concept, rationale of a national minimum wage.

“We appeal to your good judgment to take account of the malevolent scheme pushed by some retrogressive elements in the House of Representatives.

“We urge you to guide the members of the House of Assembly aright. “Honourable Speaker, if this anti-labour bill that seeks to hamstring the nation in her effort to reduce poverty and inequality is presented to you, we appeal to your Excellency to kindly refuse assent.”

Addressing the protesters at the premises of the Oyo State House of Assembly, the state government’s representative, Bayo Titilola-Sodo, gave the assurance that with Makinde renowned for being concerned about workers welfare and running a populist government, he would not assent to a bill that will hurt the workers and masses.

Bayo Titilola-Sodo said: “We know Governor Seyi Makinde’s government is workers’ friendly and people’s friendly. Some would have wanted an elitist governor that will pander to the request of the elites. Using the track record of this government, I can assure you that the government of Oyo State will not be a party to any anti-workers, anti-people, anti-masses policy. Being a workers friendly, people-friendly, masses oriented government, whatever will make life better for the workers and citizens of Oyo State is the watchword of this government.”

Speaking in the same vein, the Oyo deputy Speaker, Abiodun Fadeyi said the state Assembly will not allow a bill he described as obnoxious and anti-workers to scale through.

Though he said the bill, if transmitted from National Assembly, will be discussed at its plenary, he pointed out that the said minimum wage bill may be dead on arrival.

Fadeyi said: “I want to assure you all that the obnoxious bill, the anti-workers bill, the not-too-friendly bill that has gone through the second reading at the National Assembly will not fly here at the Oyo State House of Assembly. The Oyo Assembly is citizens friendly; it is part of our legislative agenda to listen to the yearnings of the people before we take any decision.

“We will discuss it on the floor of the Oyo Assembly when it is brought to us. I assure you that that bill may be dead on arrival.”