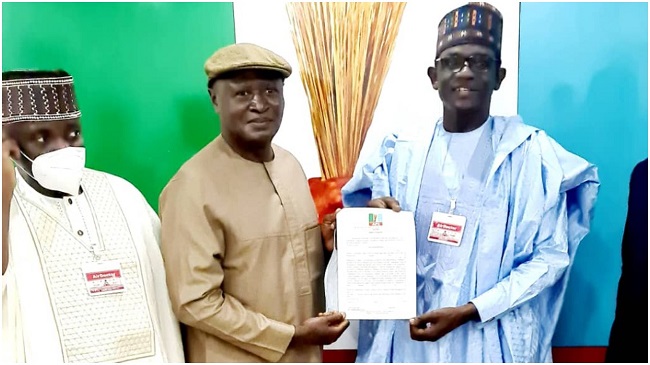 The new acting Chairman of the Cross River State chapter of the party, Senator Matthew T. Mbu took oath of office on Tuesday.

Governor Mai Mala Buni was assisted by the Secretary of the Committee, Senator John James Akpanudoedehe and Minister of State for Power, Goddy Jedy Agba.

Recall that Senator Mbu was pronounced acting chairman last week after a meeting between the party stakeholders from Cross Rivers and the interim national leadership of the party.

The two factional chairmen, Honourable John Ochalla and Ntufam John Etim were also at the reconciliation meeting held at the instance of Governor Buni.

At the swearing-in ceremony, the Yobe state governor admonished the newly-inaugurated chairman to be guided by the new, cordial and peaceful outlook of the state chapter in conducting his official affairs by carrying along with all supporters, members and stakeholders in the state.

Governor Buni also stated that “the immediate task before the new acting chairman is to further unify party members in the state so as to strengthen the party’s chances for victory ahead of the forthcoming legislative by-elections in the state.”

APGA leadership crisis: We will triumph in court ― Okeke faction