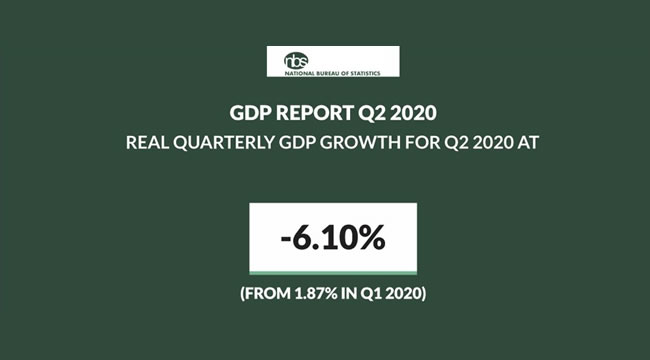 NIGERIA’S Gross Domestic Product (GDP) in real terms declined by -6.10 per cent (year-on-year) in Q2 2020, thereby ending the three-year trend of low but positive real growth rates recorded since the 2016/17 recession. This is according to the second quarter (Q2) GDP report, released by the National Bureau of Statistics (NBS) on Monday.

Consequently, for the first half of 2020, real GDP declined by -2.18 per cent year on year compared with 2.11per cent recorded in the first half of 2019. Apparently, the significant drop reflects the negative impacts of the disruption caused by COVID-19 pandemic and crash in oil price on Nigeria’s economy.

Also, the latest GDP number shows that Nigeria’s oil sector recorded –6.63 per cent (year-on-year) in Q2 2020,  indicating a decrease of –13.80 per cent (points) relative to the rate recorded in the corresponding quarter of 2019.

On the other hand, sectors which experienced the highest negative growth included transport and storage, accommodation and food services, construction, education, real estate and trade among others. The GDP growth rate decline according to the NBS was largely attributable to significantly lower levels of both domestic and international economic activity during the quarter, which resulted from nationwide shutdown efforts aimed at containing the  COVID-19 pandemic.

The efforts, led by both the Federal and State governments, evolved over the course of the quarter and persisted throughout. Quarter on quarter, real GDP decreased by -5.04 per cent. Furthermore, only 13 activities recorded positive real growth compared to 30 in the preceding quarter.