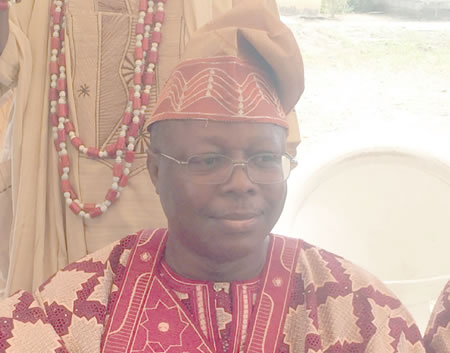 It was a moment of joy for the people of Orile-Eruwon, in Ogun State, when Phillip Oluwole Dayo Adebiyi, a United Kingdom-trained nurse, was presented as their new traditional ruler. The oba-elect, in this interview by Segun Kasali, spoke on a range of issues, including the newly launched Amotekun and involvement of traditional rulers.

Will you be able to adapt to your new role as custodian of the people’s culture, having been away in a foreign land for some decades?

I don’t see that as a challenge. Though I have left the shores of the land for some time now, the fact remains that there was never a time I didn’t know what was going on in the community. I’m always around, and that makes me very conversant with these things. So, the question of finding it difficult to adapt does not arise at all.

Did you see the obaship title coming and how did you feel?

I saw it coming because there is need for it, especially in our own locality. I knew I would become one because I was and still highly supported by the majority of the people in the community both the chiefs and others. So, it didn’t come to me as a surprise. Initially, it was that of skepticism. So, I decided to tread the path of caution.  I felt a little bit reluctant.  But all along, I knew I was qualified. I’m from a royal family and I also knew I had the capacity and competence to manage the office.

It was a bit tough because so many qualified people applied and thereafter the council of kingmakers had to select gradually. Initially, they reduced the number to about 11 and later reduced to three. And from three, it became only me. So, it was really tough and all those concerned agreed with the choice. The governor of Ogun State, Prince Dapo Abiodun, insisted that any candidate that would be chosen should be truly loved by the community, not someone just coming from somewhere to be proclaimed an oba. I think the whole essence is to ensure that whoever emerges is truly loved by his people.  You know the present governor is a man who understands the needs of the people, and he’s determined to meet them.

Do you think you really understand the yearnings of the community?

Why not? I really do. Even though I reside in the United Kingdom, that community was where I was born. So, I was born and raised in that community, and I was never at any time far from there. I really know what they need.

What are their needs?

Actually, the educational system is not all that good. I can ensure an improvement in that area with my experience. The health system is not also great. With my experience as a retired nurse, I think I can make a great improvement in that area as well, by supporting people with health education. Not only that, in the area of agriculture, I can also make a difference. When I was growing up, it was subsistence farming — from hand to mouth; but now, there are a lot of mechanical farming models that can be introduced, an idea I think people would buy into. Of course, talking about road infrastructure and all that, it is the responsibility of the government, but self-help is the best help. We would try to do the needful in order to reduce the burden on the government.

Is a title like this not beneath you going by your background and exploits in the UK?

Actually, United Kingdom is good. However, coming back home to where I was born and raised gives me joy. As they say that east or west, home is the best. Living in the United Kingdom is the pride of so many people. I had lived there and I am fine. But then, coming to the local community in which I was born is a thing of joy for me because of my plan to ameliorate and prevent recurrence of things I suffered while growing up in the community. That is why I am concerned because the improvement I am going to make will not be personally for me but the future generations of the community.

As an oba-elect, how would you describe the effect of modernisation and globalisation on the Yoruba traditional culture and traditional values?

That is really a deep one and a great concern for every well-meaning Nigerian.  While modernisation has its positives, its negatives can also not be dismissed with a wave of the hand. For instance, modernisation has impacted greatly on our traditional values in this country, both ways. Take for instance, children don’t prostrate anymore unlike those days we were growing up. I believe there is virtue in our traditional values and if the positive ones are revisited, it will do us more good than harm. Interestingly, while we should not shut our doors at modernisation and civilisation, we should also ensure that those cherished values of ours are effectively, protected.

There have been different reactions to the South-West security outfit, Amotekun. What are your own thoughts?

Amotekun is very necessary, especially at the point we are now. There is a lot of banditry, kidnapping, violent behaviour and all sort of atrocities. The Nigeria Police cannot handle these issues alone. They seem overwhelmed.  However, with Amotekun coming up, I think things will be better. It is a very good initiative and I really commend Governor Dapo Abiodun for taking a bold step making sure we are part of this.  For me, it is the way to go if we want to sleep with our two eyes closed in the region.

What do you think about issue of superiority among traditional rulers in the South-West?

I think there should be unity amongst our obas in the South-West in order to move the region forward specifically and the country generally.  I believe the way out is for every traditional ruler to make the corporate interest of the community he superintends over and the region a priority. If we do this, the issue of who is more superior to the other will not even arise.

What is your take on the inclusion of traditional rulers into Amotekun?

I strongly believe that the traditional rulers should be involved; since they are the custodians of the people’s tradition and culture. In fact, they know the people from the grassroots. I also believe that their role should be advisory. They know where things are bad, and definitely know how to offer the appropriate advice.