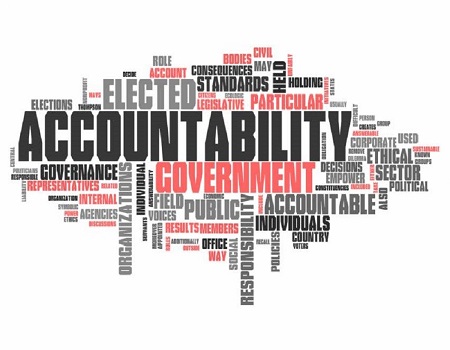 Ever since human beings started gathering together in couples, families, tribes, clans or nations, there have been leaders – someone whom everybody looked to for direction in terms of what the group should do. Over the centuries, there have been good and bad leaders. Good leaders have allowed themselves to be held accountable for their actions as they have led their people to a more secure, better reality, and bad leaders have refused to be held accountable as they have led themselves to a more secure and better reality at the expense of the people they led. It’s that simple. Right now, the world is experiencing the biggest leadership crisis it has ever had. That doesn’t mean today’s leaders are necessarily worse than their predecessors. But the world is now more connected than it ever was and

the impact they have beyond their own borders is significant. For example, previous leaders never had access to the tools that today’s leaders have which give them the capacity to influence views and events around the globe. Such tools give today’s leaders a bigger voice than they possibly deserve. Imagine if Donald Trump never had Twitter …

It is hugely ironic that, as the world has evolved to a collective consciousness that has set the stage for collaborative leadership and leadership with a higher purpose, some of the leaders that currently dominate the headlines – Donald Trump, Vladimir Putin, Kim Jong Un and our own Muhammadu Buhari – display none of the characteristics or qualities of this new generation of leaders that the world so desperately needs right now. These leaders share one thing in common – regardless of what they say, they are in it for themselves first and they avoid holding themselves accountable to the people they are supposed to be leading. Some of them may say they do, but they don’t. They do what suits them and not what’s in the interests of the greater good of their people. Indeed, Nigerians could no longer hold their emotions, as President Muhammadu Buhari increased the fuel price and electricity tariff to N162 and N66 respectively within a week. In fact, many Nigerians had not earned an income for months, due to no fault of theirs. The increase was ill-timed and ill-advised; it was also a travesty, as it would have a knock-on effect on millions of poor Nigerians who will struggle to meet the increased costs of transport and basic goods. The development will eventually lead to increase in prices of goods produced by manufacturers, which will automatically result in an increase in inflation.

At least, if you are not prepared to be accountable for your actions in your home, you are not going to be able to hold your children accountable for their actions. You may be able to pull rank simply because of your position, but you have no moral authority and will get grudging respect to your face while you are despised behind your back. And your children will grow up with damaged values. Leaders, managers and parents have failed to understand this most basic principle of accountability. Accountability all starts with you. You can’t think it should apply to others but not you – that you are somehow exempt from being held accountable. Sure, it’s frustrating to see political leaders get away with theft, but they do so because the people they lead don’t hold them accountable. Despite PMB’s electoral promise to reduce petrol pump price from N87 per litre that he met it in 2015, Buhari  had increased the price thrice within three months in recent times, now to N162, and with this increment, PMB has further impoverished Nigerians instead of him to ameliorate the suffering after a long time of lockdown for the fear of Covid-19. Nigerians should be reminded that on April 14, 2015, President Buhari’s ally and former Minister of Petroleum and Energy, late Prof. Tam David-West, told Nigerians that PMB (who was then President-elect), would reduce the fuel pump price from N87 to N40 per litre. In fact, Buhari did not debunk this statement made by his friend and major supporter then. Look at all these promises made then, who is to be held accountable for this misleading statement?

More Nigerians from all walks of life condemned the increase in the pump price of fuel. Angry consumers have argued that the increase came at a time that was least expected, while slamming the Federal Government, they described the move as insensitive and anti-people. Their take was that by increasing the price of fuel at a time Nigerians are grappling with the economic and social reality of the Covid-19 pandemic, it was nothing but to further traumatize them.

Of Lekki and incapacity of Nigerian State for leadership

Remarks of His Eminence, the Sultan of Sokoto

Summary of Whither Nigeria delivered by Mr Odia Ofeimun