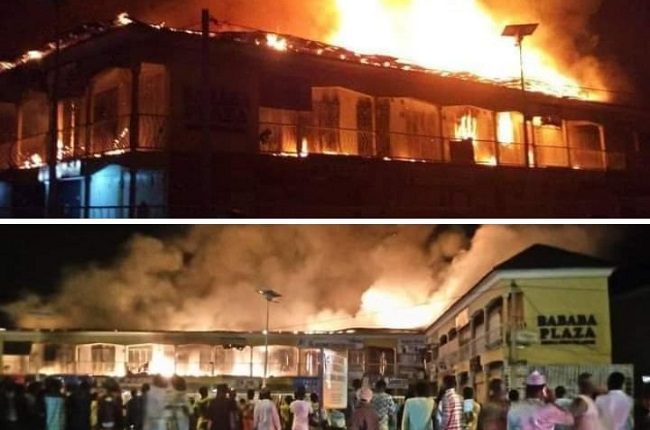 Properties worth several millions of naira have been destroyed in a late night inferno that razed one of the biggest shopping complexes in Bauchi metropolis, Bababa Shopping Complex located close to the Wunti market.

Information gathered revealed that the fire started late in the night of Friday and lasted into the early hours of Saturday as firefighters from the State Fire Service, ATAP, ATBU and FedPoly fire services fought to control the fire from spreading to other adjoining buildings.

The shopping complex which has no fewer than 100 shops and stalls was completely burnt down with nothing salvaged considering that the shop owners had closed and locked up their shops.

Though nobody could ascertain the cause of the fire insinuations are that it was caused by power surge when power supply was restored thereby causing sparks from some of the shops which power outlets were left on by the shop owners.

Bauchi State Governor, Sen Bala Mohammed Abdulkadir joined others at the scene of the fire incident late in the night as soon as he got the information. He was seen participating in the rescue efforts.

The governor empathized with the victims of the incident urging them to take it as an act of Allah, thanking Allah that no life was lost to the disaster though properties and sources of livelihood must have been lost.

Bala Mohammed who was at the scene for few hours assured that the remote and immediate causes of the incident will be investigated by the relevant authorities just as he promised that government will immediately take steps to assist the victims by mitigating their losses.

Is this my pregnancy?