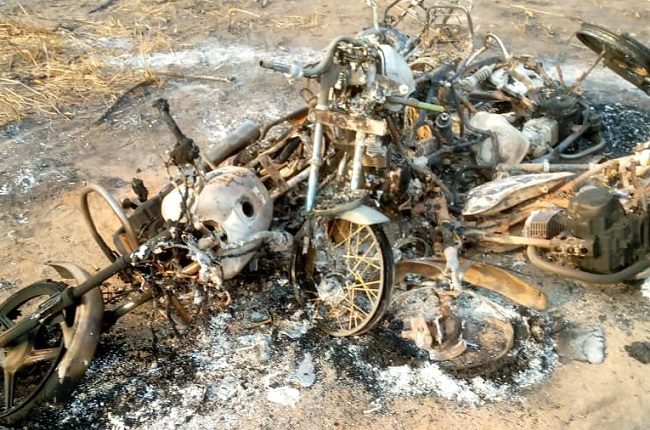 Men of the Ondo State Security Network, Amotekun, in the early hour of Thursday, stormed a kidnappers hideout at Ago Sanusi along Owo, in Owo Local Government Area of the state, following an intelligence report.

The Commander of the Amotekun in the state, Chief Adetunji Adeleye, who disclosed this said the armed kidnappers were dislodged from their base in the forest by the security operatives after the hoodlums had killed a farmer and a member of Vigilante group in the area.

He explained that the security outfit in conjunction with the men of the state Police Command, the Army and other security agencies in the state, invaded the forest after the news of the killing of the two men.

Adeleye said the security operatives mobilised to the forest but said the Fulani herdsmen who are heavily armed took to their heels when they sighted the security men and ran out of the forest.

He, however, said the Armed Fulani herdsmen set the vehicles and motorcycles of the security agents parked on the road on fire, after escaping from the forest.

According to Adeleye, “this cartel were piling up arms and ammunition to invade the entire state while masquerading as herders and using the forest as kidnappers den for negotiation and ransom, illegal mining activities and cultivation of Indian hemp.

“The Security outfits in conjunction with the Police, the Army and other security agencies in the state smoked them out of the forest after it was discovered that the bandits had killed a farmer and a member of the vigilante group in the Area.

“On sighting the security operatives, the hoodlums opened fire and a fierce gun battle ensued which lasted for more than an hour but the hoodlums ran away from the forest.

“They also went to the village where an Amotekun vehicle was parked and set it ablaze. We sympathize with the families of the victims of this dastardly act while assuring them that the culprits will surely be apprehended.”

He denied losing any of the security operatives to the hoodlums as being speculated by some section of the media, saying “the hoodlums only destroyed and set our motorcycle and vehicle ablaze.”

A source in the area also confirmed that the two men had been killed before the arrival of Amotekun and other security agents.

He said the killing led to the invitation of the Amotekun corps, saying the Fulani herdsmen had earlier abducted the farmer on his farm while a search party was organised by the members of the community.

He, however, said a member of the vigilante in the area, Sesan Adebayo, was killed during the search for the farmers whose dismembered corpse was discovered in the kidnappers’ den.

He said this led to the invitation of the Amotekun men who dislodged the hoodlums from the forest, saying we have been sleeping with our eyes opened since the farmer was kidnapped.

Attempts to confirm the incident from the State Police command were not successful as the police spokesman could not be reached as at the time of writing this report.