Property and Environment
By Tunde Alao On May 1, 2019 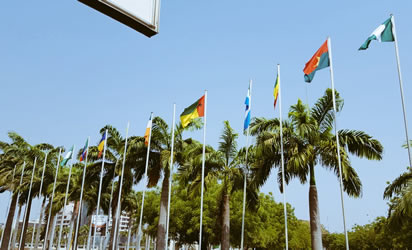 Nigeria and 14 other Economic Community of West African States (ECOWAS) members are to benefit from an $8 million five-year forest protection project, courtesy of the Food and Agriculture Organisation of the United Nations (FAO).

The global body, which made the announcement last week in Abuja said that three agencies – the Swedish International Development Cooperation Agency (Sida), FAO and ECOWAS – had joined forces to protect West Africa’s forests to help safeguard the livelihoods of millions of people, depending on them.

Other ECOWAS countries to benefit from this largesse Togo, Burkina Faso, Niger, Mali, Sierra Leone, Ghana among others.

The programme, coming under support initiative piloted by Sida, FAO and ECOWAS, would also address trans-boundary forest threats to maximise the livelihoods of forest-dependent communities.

Also, the programme is aimed at strengthening sustainable forest and land management.

According to a document, which was reviewed by the News Agency of Nigeria (NAN) in Abuja, Tiina Vahanen, FAO’s Chief of Forestry Policy and Resources Division, said the project would be key to the rolling out of the ECOWAS-led Convergence Plan for the Sustainable Management and Use of Forest Ecosystems in West Africa.

“The ECOWAS-led Convergence Plan was adopted in 2013 by ECOWAS. It seeks to mobilise support to address trans-boundary forest issues across the 15 member states.

He described the project as a concrete step towards improving the forest management in the region that would build on the momentum created in recent years to safeguard West Africa’s forests.

Mr Ulla Andrén, Sida’s Head of Regional Development Cooperation in sub-Saharan Africa, said the project to be implemented by ECOWAS would be financed by Sida with over $8 million while the FAO would give technical support.

He described the project as not only important for the people and governments of the region but also crucial for the global effort to stop climate change and loss of bio-diversity.

Andrén expressed the pleasure of his organisation to be partners with ECOWAS and FAO on trans-boundary forest management in West Africa.

Johnson Boanuh, ECOWAS Commission’s Environment Director, noted that West Africa’s forests and wetlands were an important source of livelihood for millions of people.

He pointed out that about 72 million hectares were under treat.

According to him, the forests and wetlands are also home to a wide range of vulnerable endemic animal species and more than 200 plant species.

“They are exceedingly affected by deforestation and degradation caused by various drivers, including unsustainable agricultural expansion and illegal logging.

“These are often exacerbated by trans-boundary issues such as trade between regions or within a region, which require strengthened forest governance and capacity at a regional level.

“The loss of forest cover in West Africa was four times higher between 1990 to 2015 than at the global level,” he said.

The ECOWAS director said the project would develop a regional knowledge portal to improve access to data and share information on best forest management practices.

“The project will also support the implementation of other national and international commitments of West African countries, such as the Nationally Determined Contributions under the Paris Climate Agreement and Sustainable Development Goals,” he said.