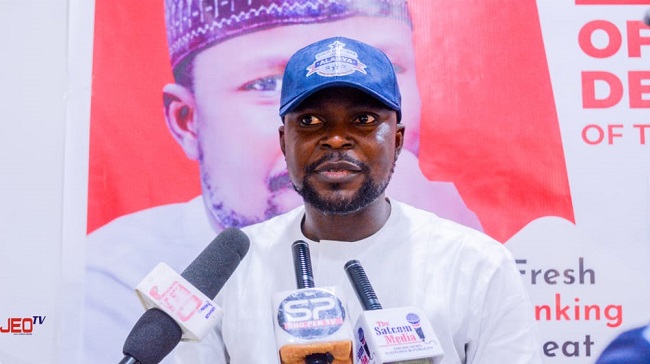 Peoples Redemption Party (PRP) candidate for the House of Representatives (Ilorin-West/Asa federal constituency) in the 2023 general election, Nurudeen Adams Alaya, has promised to reposition local government areas in order to improve proximity to people if elected.

A journalist, who had worked in different media houses in the country, the PRP candidate said that his interest and experience in journalism would propel him to continue to be the voice of the masses.

“As a communicator, who has continuously represented the voices of the masses in various offices, my ideology in politics is tied to repositioning the Local Government to further its proximity with the people and discharge the quality of good governance to various communities”, he said.

Alaya, who promised to ensure the delivery of dividends of democracy to his constituents if elected, said that “To the good people of Ilorin-West/Asa Federal Constituency, I, Nurudeen Adams Alaya, am here to bring closer to our people the true meaning and dividends of democracy with effective and qualitative representation. I am assuring you that my representation will bring a new dawn and will be a good reference point for the various communities in Kwara state and Nigeria”.

The PRP candidate, who hailed from the popular Alaya compound in Pakata community of the Ilorin metropolis, said that his polling unit is located at Ode-Alaya, in Ubandawaki ward, Ilorin-West local government of the state.

“I am an intelligent and experienced journalist whose major interest lies in human rights propagation and defence, current affairs, conflict resolution (through mediation and reconciliation), and politics, having served in various political portfolios (which vary from being North Central Coordinator for Buhari Mass Movement in 2014, Member, Youth Affairs Committee for Abdulrahman Abdulrazaq Organization in 2018, Member, Election Planning and Monitoring Committee, APC Presidential Campaign Council in 2019 and more). I have been able to each time portray the true definition of independence in ideology, thought, probity and doctrines”, he said.

He also said that his driving force is the independence of thought and ideology, “One that is not tied to political crumbs but productivity capable of affecting the people of Ilorin West/Asa Federal Constituency, Kwara state, and by extension, Nigeria for good”, he
said.

“Having been part of the IBB Trumpet Newspaper, my participation in politics was drawn towards distilling politicians whose minds were laced with selfishness and arrogance into ones with discipline and commitment.

“During this time, Nigerian politics was just manifesting and things were not essentially tallying with the freshness of new ideas and sociology of people’s most yearned utopia. IBB, in whose administration we believed would effect the change, was unwittingly made to withdraw and our hope for a new society was jettisoned. Recognizing this, and rather than being hooked towards the perpetrators of fake ideas and servitude, I left the IBB Trumpet for the Action Congress of Nigeria (ACN) in 2006. This was where I had kept my participation open and had contributed enough of my efforts in effecting sanity in the then system of any-which-way-na-way”.