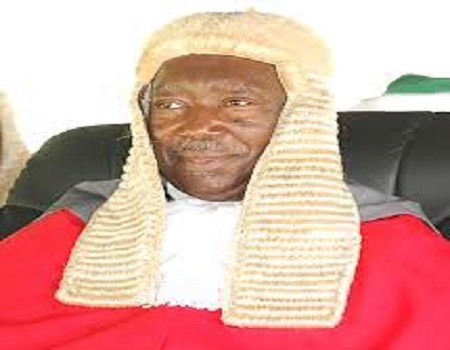 THE Chief Judge of Kogi State, Justice Nasiru Ajanah has called on the federal government to provide training workshops for Nigerian Correctional Service in Kogi state to enable the inmates to have access to reformation skills rather than allowing them to be more hardened.

Justice Ajanah also appealed for an improved infrastructure to improve the living condition of the inmates in custody.

The Chief Judge who made the appeal while on his regular prisons decongestion exercise for inmates that are unlawfully kept in detention at Nigerian Correctional Service in the eastern flank of the state, said the purpose of establishing Correctional Service was to reform jailed offenders.

He lamented that a situation where the system lacks training facilities, the inmates can become more hardened than they were before their incarceration.

“I noticed that the facilities at Ankpa, Dekina and Idah Correctional Service are still old and there is no improvement in the structures and I hope the appropriate authority will take note of that because these places suppose to be correctional facilities which means there is need to improve on what we have here so that detainees can learn something that will engage them after they regain their freedom.

“We are worried and appealing to the appropriate authority to provide training materials for tailoring, carpentry, mason , automobile mechanic among others, so that they will not leave these places to become more hardened than they were before coming to any facility”

However, at Dekina Correctional Service, the Chief Judge reviewed only six cases out of eleven and granted unconditional release to Chigoeze Christopher who was on trial for cheating by impersonation and the bail condition of one other inmate, Rebbeca Sanni, who could not fulfil her bail condition earlier granted by the high court was varied from two sureties with the sum of N400,000 each to two sureties who must be residents of Anyigba where the inmates hailed from.

Also at Ankpa, Justice Ajanah granted unconditional release to Kabiru Muktari who was arrested and charged for conspiracy and armed robbery.

According to the Chief Judge, “The inmate has not been taken to any court since his arrest in February, 2018 and the legal officer in this division has informed me that application file on behalf of the defendant was refused by the High Court in Okpo on the ground that the application has been filed before a wrong court .

“The offence of armed robbery alleged against the defendant is a serious one, however, no matter how serious an offence is, it is not an excuse or a ground for any person to go against the position of the constitution with regards to the person’s fundamental rights.

“Today that we are on this visit, neither the prosecution counsel nor the court have any information or are in the position of the case file. I am left with no alternative than to order the release of the defendant especially as he is presumed innocent.

“The period of two years he has been in detention without any attempt to present him before the appropriate court amount to an infringement on his fundamental rights. The defendant is hereby released unconditionally and the release is without prejudice to any other action that may be taken against him”.

At Idah prisons the Chief Judge also released three awaiting trial inmates, Is ah Ibrahim, Umar Mam man and Umar Hassan. They were standing trial before the Chief Magistrate’s Court Ugwolawo for offences of criminal conspiracy and armed robbery but released for lack of prosecutorial records. The Chief Judge urged the freed Inmates to amend their conducts and become useful to themselves and the society.

Ogun, Lagos takeover of federal roads not yet completed ― Abiodun