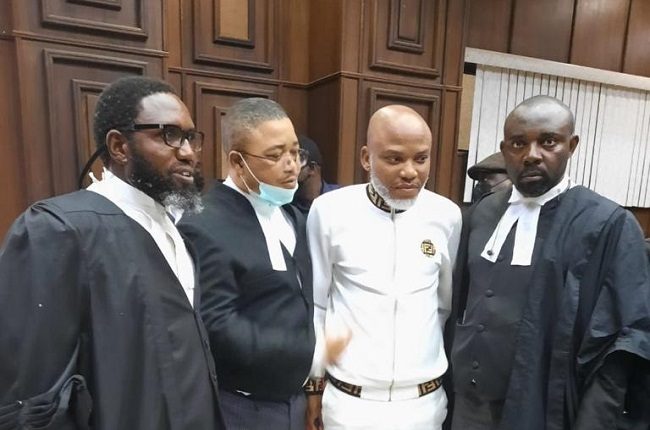 PAN-Igbo organisation, Ohanaeze Ndigbo, on Sunday took a swipe at the Minister of Justice and Attorney-General of the Federation, Abubakar Malami (SAN), over his allegation that the leader of the proscribed Indigenous People of Biafra (IPOB), Nnamdi Kanu, and his group were behind widespread killings and arsons in some parts of the country.

The body said it decided to cry out over the allegation because IPOB members “are our children and we owe them undiluted love, duty and responsibility” and “any unwarranted attack on IPOB is an attack on the entire Igbo.

This position was conveyed in a statement titled: ‘Malami has crossed the red line’ made available to the Nigerian Tribune by the national publicity secretary of the body, Chief Chiedozie Alex Ogbonnia.

At a press conference held in Abuja on Friday, the minister had alleged that despite the proscription of IPOB by the Federal Government, Nnamdi Kanu continued the subversive campaign, instigating and inciting broadcasts to direct members of the IPOB to launch attacks on government.

“The EndSARS protests of October 2020 played into the sinister plans of Nnamdi Kanu, whereby he seized the protests through subversive and inciting online broadcasts and actively commanded and directed attacks on security personnel and facilities.

“As a result of these broadcasts, members of IPOB attacked and killed security personnel and burnt down Police stations, Correctional centers, INEC offices, bus terminals, the Palace of Oba of Lagos, banks, hospitals, shopping malls and vehicles, amongst others,” Malami alleged. But Ohanaeze said all the remarks made by the AGF concerning IPOB were “very inelegant, imprudent, malicious, and fallacious,” accusing the minister of trying to play an ethnic card.

According to the organisation, the allegation that the IPOB vandalised and looted the palace of the Oba of Lagos and burnt more than 150 buses at the Lagos Bus Terminal were mere ethnic cards simply intended to play the Yoruba against the Igbo.

It added: “Malami should know that the Yoruba do not spill the Igbo blood and vice versa.

The likes of Colonel Adekunle Fajuyi, who chose the supreme prize instead of betraying an Igbo in the person of General Johnson Thomas Umunnakwe Aguiyi Ironsi, have been replicated across the board in millions. Perhaps, Malami does not know the historic role played by the current Oba of Lagos, as a police officer for the return from exile of Dim Chukwuemeka Odumegwu Ojukwu, the Ikemba Nnewi in 1982.”

It described as crude and anachronistic all the alleged “game-plans” of the minister, stressing that the point of divergence between the Ohanaeze and IPOB was that while the former believed that the Igbo ingenuity would find full expression in a restructured Nigeria, the latter appeared to be tired of the age-long marginalisation of the Igbo in a country they have sacrificed so much to build. It declared that there was no Igbo name among all the suspects charged by the police to court in respect of the 2020 mayhem in Lagos.

The organisation alleged continued marginalisation of Ndigbo in the scheme of things, including federal appointments, allocation of projects and funds, as well as distribution of resources and maintenance of federal highways compared to the other five zones across the country.

Why we honoured Fela with post-humous award —Rite Foods