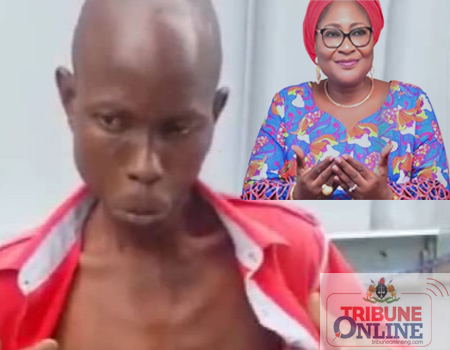 The wife of the Governor of Osun state, Mrs  Kafayat Oyetola,  through her initiative, Ileri Oluwa Development Initiative, has taken over the matter of a Nigerian man, Benjamin Sesan Ojo, a homeless man Nigerian man in Trinidad and Tobago and his six-year-old daughter, who requires help to come back home.

Sesan Ojo from Ilesa in Osun state has been living in Trinidad and Tobago for twelve years and he is homeless and had been sick for three years without a job or means of coming back home, having lost contact with his family for long.

Mrs Oyetola heard about the man through a viral video and being a humanitarian that had been helping the homeless and psychotic people on the street for over 15 years, she was moved by his plight and decided to help.

The man who lost his wife a year ago cannot do anything for himself at present and is a burden to many people. According to him, “I need help to get home, I don’t have work, I need help to survive till I go back to Nigeria. I am a burden to everybody. I went to Nigeria embassy to ask for help to come home but they said they cannot help me, they just gave me money to feed for a week but after that I couldn’t see them again,” he stated in the video.

He is suffering from a peculiar ailment that has caused issues for one side of his body; the veins in the side is shrinking and he is deteriorating and with nothing to do, he decided to come home but couldn’t raise the required funds as he will need 10, 000 United States Dollars for his flight and also needs to get a Nigerian passport for her.

When help was not forthcoming, some people helped him by making a video to explain his plight and this got to the attention of Mrs Oyetola, who took the case up and made the necessary contacts.

Speaking through correspondence, the Nigeria Acting High Commissioner, Port of Spain, Trinidad and Tobago, Mr Wale Isajimi, stated that plans are underway to facilitate Ojo’s trip home at the request of Mrs Oyetola who is already making efforts to locate Ojo’s family in Ilesa.

He stated that since the daughter doesn’t have a Nigerian passport,the commission will ensure she gets a visa before the journey home  which is in a few days, adding that because they do not have a valid United Kingdom or United States transit visa, he advised that their flight be routed through the Port od Spain through Panama, Sao Polo to Adis Ababa to Lagos.

Information given to the high commission by Ojo is that his father’s name is Ojo Joseph Oluwadare and his house is along testing ground in Ilesa after African Grammar school.

Though Mrs Oyetola, who engaged in the humanitarian service in her personal capacity is trying to keep information about her involvement away from the public, Nigerian Tribune gathered that she is working on efforts to rehabilitate Ojo after he gets adequate treatment when he gets to Nigeria in a few days with his daughter and has liaised with the former Health Minister, Prof Isaac Adewole, to ensure he gets adequate medical treatment when he gets back so he can pick up his life.