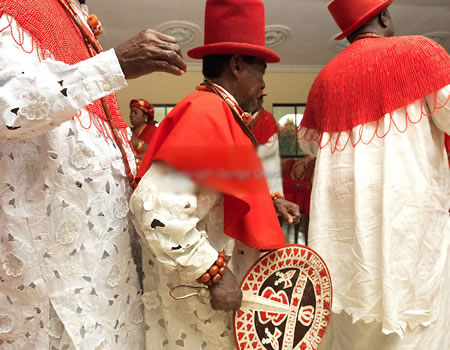 In spite of the ongoing dusk-to-dawn curfew at Udu Local Government Area of Delta State to stem the heinous activities of cult groups, one Chief Egolor Kolo has been reportedly stabbed to death.

The Urhobo chief was killed at about 8:00p.m Thursday at Ukpiovwin in Udu town.

“Chief Egolor Kolo was killed at Ukpiovwin town in Udu LGA at about 8:00pm.

“Serious cults fight led to stabbing of the victim to death even as curview is in force,” the source revealed to TribuneOnline.

TribuneOnline gathered that after the victim was stabbed, he was rushed to a hospital where he gave up the ghost.

A top officer in the Nigeria Police informed TribuneOnline that the stop-and-search method by security agents to fish out cultists in the local government would not work.

He advised the security agents to go after the cult rivals and smoke them out of their homes and covens.

“They should go after the boys in their houses and covens rather than this stop and search on the road.

“Only Participants observation can solve the cult debacle in the area,” the top police cop noted.

TribuneOnline recalls that the Chairman of Udu LGA, Mr Jite Brown, during the week, imposed a dusk-to-dawn curfew on some areas in the council over the spate of cult-related clashes.

The curfew took effect from Wednesday September 18, 2019, and was to run from 9:00p.m to 6:00a.m daily with the banning of motorcycles, tricycles and commercial cabs on the roads.

In a statement signed by the council secretary, Elohor Awinoron, the chairman said the decision was taken at the end of the Peace and Security Meeting with the Divisional Police Officers and other security chiefs in the council.

The curfew was at the instance of cult clashes and other criminal activities resulting in the killings, raping and maiming of some residents in the local government.

With the killing of Chief Egolor, the claim by the Inspector General of Police, Muhammed Adamu, earlier on Thursday in Abuja that “there is tremendous decrease in kidnappings, banditry, armed robbery and acts of cultism,” may be a far cry from the reality in Delta State.

Meanwhile, the Delta State Police Public Relations Officer (PPRO), Onome Onovwakpoyeya, who was contacted by TribuneOnline on Friday morning, could not immediately ascertain the veracity of the report, promising to make enquiries and call back.

She was yet to feed TribuneOnline back as of the time of filing the report.

Illegality of forceful restriction of movement on account of environmental sanitation