Imo community protests against acquisition of land for Air Force Base 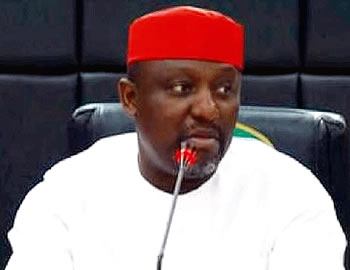 THE people of Umuotukwe, Umuowa community in Ngor Okpala Local Government Area of Imo State on Monday, organised a peaceful protest against what they described as “forceful acquisition of their ancestral farmland by the state government.”

Some of the placards carried by the protesters read: “Invasion of community land without due process is a crime”; “Forceful takeover of our land is anti-people”; “ Government wants to kill us by installment”; and “We cannot run away from our God-given land because of Nigeria Air Force.”

Said he “We are angry because the state government invaded our land with share brute force, claiming that they want to build Air Force Base,” Ibe-Oparanwata said.

He lamented that Umuotukwe Umuowa community owns over 85 percent of the land proposed for the Air Force Base.

“We peacefully protested on the very first day the state government and some Air Force personnel came for the groundbreaking ceremony”, the community leader recalled.

Ibe-Oparanwata decried what they were currently passing through, as “incredible saying that it is most unfortunate that they have gone back on their earlier promise of engaging us in meaningful dialogue over the land.”

He explained that the community has been roundly ditched so far, Ibe-Oparanwata also contended that “if government goes ahead to take this large expanse of land, it translates to sacking us from our ancestral homeland.”

Responding to a question, the community leader said: “We are very accommodating in nature. Government should please, enter into a very meaningful dialogue with the land owners. For now, nothing meaningful is coming from government side.”

When contacted on his mobile line for government’s side of the story, the Commissioner for Information, Public Utilities and Tourism, Engineer Obinna Nshirim, affirmed that the land in question was earmarked for the construction of 211 Regiment Group, Nigeria Air Force Base.

“Government has already opened dialogue with the land owners. The demonstration is not necessary.  Government has no intention of using force to acquire the land. We will keep talking with them until we arrive at something,” Nshirim said.