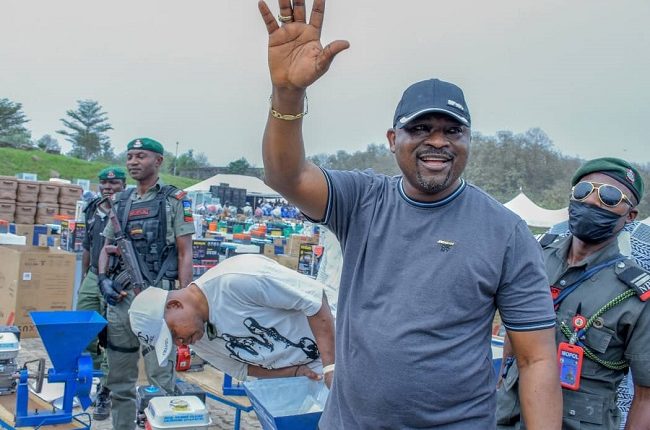 The member representing Ibadan North Federal Constituency in the House of Representatives, Prince Olaide Akinremi, has given 1,250 members of his constituency different valuable tools and items of economic importance to start small businesses.

Distributing the 29 different items at an event held at the pavilion of the International Conference Centre of the University of Ibadan, Akinremi noted that it was heartening that a large number of his constituents got items for which they had received training.

He said the training and support to start small businesses in areas of competence was of paramount importance to him and noted that as he had been doing before, he was strategic in ensuring that the tools and sundry items were not shared to the wrong set of people.

According to him, students who are under the scholarship of Prince Akinremi Foundation (PAF) were among the beneficiaries of the items as he had earlier promised to them, and added that the students had also been trained in different vocations such as ICT, hairdressing, tailoring, catering, barbing, shoe-making etc.

Akinremi said: “It is important that at all levels, we continue to train people adequately in different vocations that are relevant to the society. It is also important that we support such trainees with the necessary tools and equipment to enhance their vocational abilities. In addition, they are also given cash which would greatly help the start-up and enhance the sustainability of such businesses.”

He reiterated his commitment to continually empower the people of Ibadan North and to also always encourage them to embrace entrepreneurship as means of not just securing their own economy, but also as a means of reducing poverty and unemployment in the society.

Akinremi charged the people to look forward to more training and skill acquisition at a centre he facilitated which is located at Immanuel College Primary School, as well as to the soon-to-be inaugurated Prince Akinremi Town Hall also in Ibadan North.

Gbajabiamila, he contended, had continued to work “assiduously in the interest of our country, and if a man as such is privileged to get the support of Nigerians for the highest seat of office in our nation, we will only make more progress, as he is a man whose current feat as the Speaker of the 9th Assembly of the House of Representatives supersedes that of his predecessors.”