How a dying man was raised in Adamawa crusade — Bishop Zuga 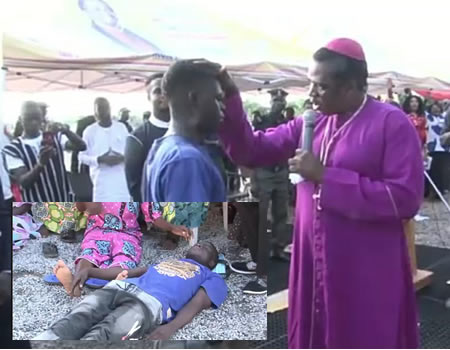 A cleric has been reported to have restored life into a young man who was said to have been in a coma for seven days.

It was gathered that Bishop Sam Zuga of the House of Joy Ministry, healed the average-age man in the middle of a crusade-like event and a free medical treatment programme in Yola, organised by the cleric.

An eyewitness account said, the venue came alive when the man, who was brought out of the crowd, rose after a deliverance session.

It was gathered that the pathetic condition of the young man said to be brought in lifeless caught the attention of Bishop Zuga, who had to purse his ministration, just as he collected a bottle of water from one person in the crowd and sprinkled it on him as he received his healing almost immediately.

Speaking on the development, Zuga noted that the occurrence was a testament that the true manifestation of the power of God still exist, adding, “The Book of Luke 5:17 says, now it happened on a certain day, as He was teaching, that there were Pharisees and teachers of the law sitting by, who had come out of every town of Galilee, Judea, and Jerusalem. And the power of the Lord was present to heal them.”

“Where there is the teaching of God’s words, His power is always available for deliverance and was how he got delivered. While I was building my relationship with God years back, I have always prayed and wanted to be like the Archbishop Benson Idahosa, who has always taken the step of delivering the people through the teachings of God’s words. I thank God for making me instrumental to His works,” he added.

WNTV at 60: A future trapped in the past