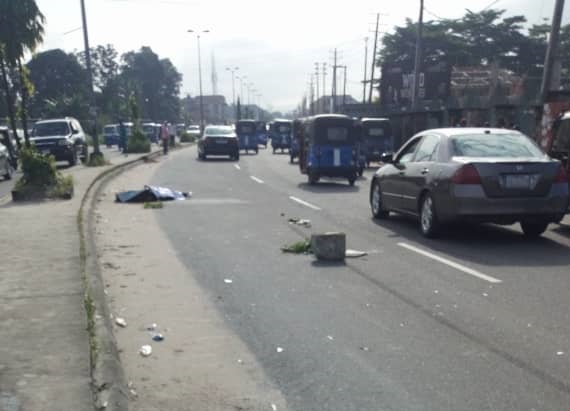 Two persons have been run over and killed by suspected hit-and-run drivers at separate locations in Uvwie Local Government  Area of Delta State.

One of the victims was a man in his 30s. He was hit at opposite of Customs Barracks, off Airport Road, Ugborikoko.

The other victim was knocked down directly opposite Robinson Plaza, along the Effurun-Ughelli Expressway.

Suspected members of the family of the victims along Airport Road and bewildered sympathisers were seen at the scene of the incident bemoaning the incident.

The airport road victim was said to have stepped out of his street at about 9.30 pm to purchase an item across the road when he was knocked down.

The deceased was said to have been hit by a vehicle on a very high speed, given the broken limbs and hands of the victim.

Security operatives were also seen at the scene trying to evacuate the corpse and ensure free traffic flow.

On the other hand, the victim killed at Effurun-Ughelli highway was yet-to-be-identified and still lying on the highway, as of the time of filing the report.

Local Government Area chairman of Uvwie, Hon. Ramson Onoyake gave assurances the situation was being handled by the appropriate quarters.