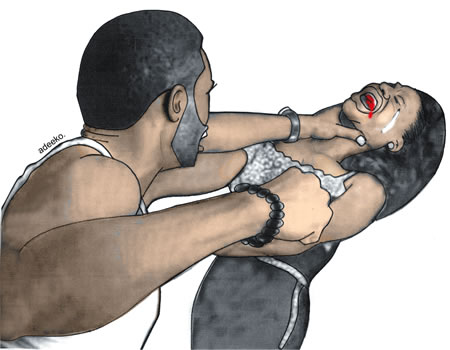 Every woman must realize that, as small as the mouth or tongue is, it is very powerful. A tribal saying captures this power of the mouth thus “the mouth can kill and make alive. My mouth will not kill me.” A lot of relationships have been ruined due to negative use of the mouth. It is an open secret that many marital conflicts resulting into wife battering have their root in verbal abuses on the husbands. A wife can make very strong negative remarks about her husband during conflicts, so much as to make the husband lose his sense of reasoning. The end result is usually unpalatable.

Imagine a wife telling the husband that the only thing he is good for is s*x. In one instance, a wife actually told her husband that, he was better referred to as a hoe rather than a husband. In another instance, in a public gathering, a woman stood up right beside her husband, in response to a call for widows present to stand up. When the husband corrected her that the call was for widows, she retorted that she knew, but stood up because she was a widow with a living husband. Simply stated, her husband was as good as dead.

Wives must realize how destructive the mouth is, and restrain themselves from using it negatively when there is a conflict in the home.  Not only that, wives must also desist from putting up an attitude of “what can you do” towards the husbands in addition to unpleasant negative remarks. Doing so is like adding insult to injury for the husbands. What amazes me is that many wives with such an attitude do not withstand a blow from the husband before collapsing despite the mouth boasting. What one would have thought would be’ fight to finish’ usually end up in a no match situation for the wives.

I have no doubt in my mind that if wives will watch their mouths or tongues during conflicts in marriage, incidents of wife battering will be drastically curtailed, if not completely eradicated. It is great wisdom on the part of wives to keep our mouth in other to keep our life.

My book, ENJOYING GREAT s*xLIFE, is a good manual to help preserve the marriage institution. You can call me on 08112658560 for copies