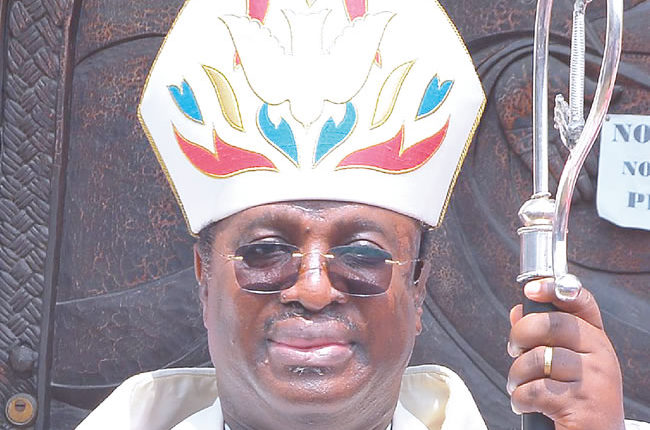 The Bishop of the Anglican Diocese of Lagos,  Right Reverend (Dr) Humphrey Bamisebi Olumakaiye, is the Secretary of the Supra West Board, Church of Nigeria and formerly the Youth Chaplain for more than a decade in Ilesa Diocese before he was appointed the chairman, Youth Work Board. In this interview by SEGUN KASALI, Olumakaiye speaks on the state of the nation and issues confronting the church.

Many people, including Christians, have different opinions about what the Church is all about. But what is the Church exactly?

When you look at the word ‘Church’, it is from the book ‘Ekklesia’, meaning the coming together of God’s own people, and an assembly of God’s children. So, we discovered that there are many misconceptions about the Church; thus, making the Church receive several blame. The Church is not a building, it is not the walls. It is the coming together of the faithful, those who have given their lives to Jesus Christ and follow His concepts and principles. So, they are the church of God.

Would you say the different denominations in Nigeria are living up to the essence?

To some extent! We want to thank God for what He is doing through His Church. We can now draw an inference that if true that is what the Church really is, then we know that Jesus Christ can be trusted with His statement and in Matthew 16:18 He says, “Upon this, I will build my church and the gate of hell will not prevail against it”.

Without any iota of doubt, the truth is that the Church of God is living up to its essence, at least to some extent and there are still transitions from the kingdom of darkness into the kingdom of light. If not for the Church of God, I believe, for example, this nation would have collapsed because many people would have committed suicide with a myriad of problems facing us. You see pastors and others preaching and giving people words of hope and that there will be light at the end of the tunnel. And you know that when you have hope you have everything. When you look at the moral decadence in the society, the Church has been playing a vital role in making sure that we live according to God’s precepts and follow the path of salvation.

Would you say the consequences of the relationship between the state and the Church are what we are experiencing in Nigeria?

There is a strong relationship between the Church and the state, hence they need to work in tandem. Today, the Church in its own little way is also thriving to ensure a smooth relationship with the state by interceding for it at all levels, offering spiritual advice when necessary and lending a helping hand when the need arises. So, for example, we can see the role played by the Church during the lockdown in lending a helping hand to the state and we want to thank God that where the Church grows very well, the relationship should be very smooth. There is no way we can divorce the Church from the state because we also have the people in government that are also part of the Church of God. And by the time you influence them positively, you will discover that it will reflect in their leadership duties.

Are you saying there has not been positive influence on the leadership in the country and that is why we are having a myriad of problems such as corruption, dishonesty, and all sorts?

We will continue to pray. It is quite unfortunate that we discover that people have gone the way of the flesh and it is not easy. There are some things that are natural – it is natural to sleep, eat, and so on, but it is not easy to be prayerful. It is not easy to read the Word of the Lord as well as to follow the injunction of the Lord. It requires sacrifice, submitting the flesh to the dictate of the Holy Spirit and that is the missing link. You have many people in the Church today, but only a few are strong believers and ready to walk the talk. The message is being preached but how many people are living according to that message? So, we have a proliferation of churches. Hardly will you see any street now without seeing between five and ten churches. But you will discover the number of churches has not translated into godly life in the society.

The paradox is that despite the number of churches, there are variants of crimes.

So, you also believe that this lack of confidence in the leaders by Nigerians led to the long stretch of the ENDSARS protest across the country?

Dealing with the problem of crimes among the youths should be the concern of the Church and must not be seen as the sole responsibility  of the government because government  alone cannot meet the needs of the teeming youths. This was highly demonstrated during the EndSARS protests that led to the unfortunate destruction of lives and properties as soon as it was hijacked by hooligans who unleashed havoc. The protests started as peaceful protests when youths took to the streets demanding for an end to police brutality, justice for the victims of police brutality, an end to the abuse of power on all levels and good governance.

It, however, turned violent when hoodlums hijacked the peaceful protests and used the opportunity of the absence of the security forces on the streets to cause mayhem on innocent citizens, vandalized public and private properties and looted wares. The protests of this magnitude call for the attention of the Church to rise and take actions in complementing government’s efforts to avert the impending youth crisis in our nation.

Some people believe that the time to restructure Nigeria is now, what is your take on this?

I want to say that we are long overdue for restructuring. This is a very big country of over 200 million people and there are over 100 tribes in the country. There is no way two people can work together unless they agree. I think and I believe that the country is long overdue for restructuring. Restructuring is not a coup d’état and I think the government should not see it that way: that a particular religion is taking advantage of the other. It will help governance. It will bring the government closer to the people and that is what we are clamouring for. The restructuring will enhance handwork, productivity, and help the people within the region to manage their own God’s given natural resources to their advantage.

This will not have a negative effect on the government. Instead, it will strengthen it. It is unity in diversity. The way we are going now, there is no trust. Look at the police force, the only way out is state police. When we have state police, they will understand the terrain of their own community. If we had had state police in the country, insecurity in the nation would have been reduced to the barest minimum. The bureaucracy is just too much. So, there is a need for devolution of power along regional lines and the nation will definitely be more united.

What is your advice to the youths amidst the unrest that was recently quelled, even though there are alleged plans to stage another one?

Let me give kudos to the youths in general by saying we want to thank God for them for coming out en masse during the last protest. They have spoken and they have spoken very well and loudly also for everybody to hear. My own candid advice to the youths is that they should not go back. They should try as much as possible to be involved in governance one way or the other. Thank God for the technological age that we are in now. This is a very powerful instrument and I know that forever the government will never take the youths for granted again. It can never be business as usual again. So, I want to commend them that they have done well but at the same time, they should be ready for subsequent elections in the country so that they will be able to mobilize themselves very well, not to only protest or use the internet to communicate, but they should come out boldly and be involved in the politics of this country. When we have some of these youths coming out for elective positions, people should be able to support them.

What is your reaction to the freezing of the bank accounts of the 20 EndSARS promoters by the Central Bank of Nigeria? Don’t you think the government should have a rethink over this?

As regards the freezing of the accounts, I think that is not necessary. The government should not do that. You cannot be giving out carrots and at the same time using the stick. You cannot be blowing hot and cold at the same time. That is the crisis of trust we are talking about. If you are saying you are commending those youths for speaking out and you are ready to do all that they have requested and they have asked for genuine things that police brutality should be stopped and also bad governance, I feel it should stop at that. You should not start coercing, arresting, and also freezing the accounts of the protesters. I would not support that. That is not the right way to go because it is another bad sign for the future development of what will come up in the future. It is not good at all and I think the government should do everything possible to make sure that is reviewed and stopped.

To Gov. Kayode Fayemi: A response