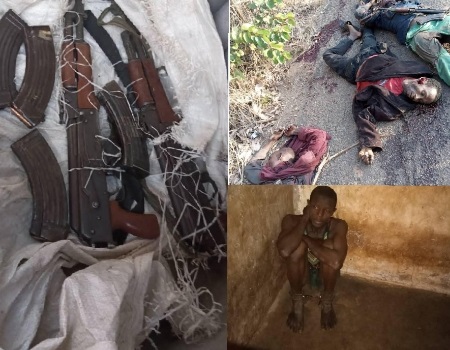 The Kogi State Governor, Yahaya Bello, has commended the effort of security operatives in Kogi State in combating crimes on our highways.

The governor eulogised the vigilante personnel for their gallantry in foiling the daring antics of undesirable elements on the Lokoja-Gegu-Abaji road who took to the highway to attack travellers. He described the dexterity of the combined security architecture as brave and sacrificial.

The Governor who made this known to newsmen on Tuesday morning said he was aware of the positive impact of community policing, reason his administration embarked on the recruitment and training of 6,000 vigilantes in 2017 for community policing, noting such initiative have yielded tremendous result.

“Our investments in community policing by involving the people to police their community is now yielding very positive outcome, and to sustain this gain, more of this initiative will be our lot as we strive to rid our state of crimes.”

He said he will not surrender in the war his administration has wedged against insecurity until all criminal elements in the state and those who come into the state to torment crimes are flushed out.

He reiterated his administration commitment to continue to support all security agencies in the state to enhance their operations.

4 men bandits who lurk around Lokoja-Gegu-Abaji road were gunned down during an exchange of firearm with men of the Nigerian Police and local vigilantes on Monday evening while 4 others arrested with 4 AK-47 and several rounds of ammunition yesterday’s evening while engaging in kidnapping and robbery on Lokoja-Abaji road.