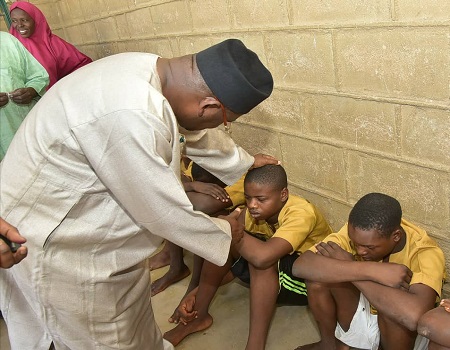 Secretary to Gombe State Government (SSG), Prof Ibrahim Abubakar Njodi has expressed disappointment with the level of neglect at the Social Welfare Children Rehabilitation Center in Gombe describing the situation as most unfortunate and heartless.

Abubakar Njodi expressed this on Thursday when he visited the centre on a familiarisation describing the poor accommodation and sanitary condition of the rehabilitation facility as unacceptable to any responsive government which places the welfare of its citizens as a top priority.

He, therefore, directed the Commissioner of Women Affairs and Social Development to immediately submit to his office all the requirements needed to run the Center more effectively and efficiently in order to make the most efficient and easy for the inmates.

The SSG also assured that the Government will do everything possible to make the Center more responsive to its mandate of rehabilitation and remoulding every child who passed through the Center.

The SSG was also at the skills acquisition centre for the physically challenged where he pledged Government’s quick intervention to make the Center functional for the benefit of the people.

He commended the management of the two centres for their dedication to duty in spite of the challenges confronting the centres.

While conducting the SSG round the two centres, Commissioner for Women Affairs and Social Development Mrs Naomi Joel Awak had expressed worry at the neglect the two centres suffered in the hands of the past administrations in the state.