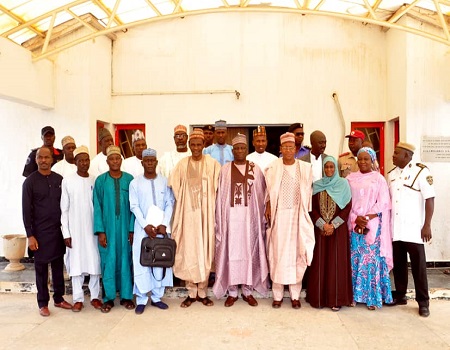 In its renewed bid to ensure the implementation of environmental, traffic and related laws and regulations in the state, Gombe State Government has constituted A 14- Man Committee.

A statement by Ismaila Uba Misilli, Senior Special Assistant on Media to the Governor contained that The Committee is under the Chairmanship of Special Adviser to the Governor on Security Matters, Retired Commissioner of Police, Muhammad Wakili.

While Inaugurating the committee on Monday in his office, the state Deputy Governor, Dr Manassah Daniel Jatau said that the panel was constituted to ensure that people in the state obey environmental and traffic rules for safety and well being of the citizenry.

He gave the terms of reference of the committee to include, ensuring acquisition and installation of speed breakers; appropriate road signs and especially at sloppy and hilly areas to alert motorists with a view to forestalling accidents.

The Committee is also mandated to remove all traders and other businesses that obstruct the free flow of traffic along all roads in the state capital and major towns as well as work to ensure compliance with the right of way.

It also has the mandate of working towards reducing to the barest minimum, drug abuse which has become alarmingly high according to some reports, with a view to changing the narratives and is also expected to check indiscriminate waste of disposals and impose a penalty on violators to serve as a deterrent to others.

Responding on behalf of the committee members, the Chairman, CP Muhammad Wakili appreciated the government for finding them worthy to serve in this capacity, pledging to justify the confidence reposed in them by ensuring that violation of traffic rules and environmental laws are highly minimised.

While calling for the support and cooperation of the government and good people of Gombe State, CP Wakili warned drug traffickers to desist from their dastardly acts as anyone caught will be dealt with accordingly.

Gov Bello felicitates Keyamo at 50, describes him as legal icon

Supreme Court verdict: We will not tolerate any breach of law, order in Benue, police warn mischief-makers