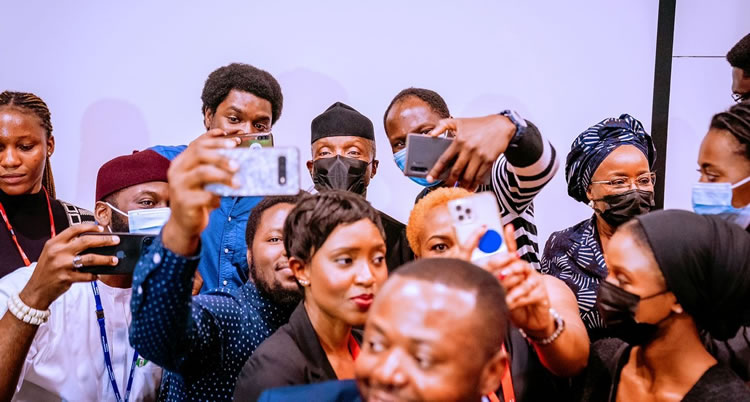 The Vice President, Prof Yemi Osinbajo got a rousing welcome and interaction this afternoon at the UN Energy High Level event held at the Imperial College, London where he spoke on the global Net-Zero Emission target and the need for a just, equitable energy transition especially for Developing Countries.

Earlier the Nigerian VP held a close door meeting with
Alok Sharma the British cabinet ranked President-Designate of the forthcoming UN Climate Conference COP26 holding at the tail end of this month through the early days of November in Glasgow, Scotland. Also at the meeting was the United Kingdom’s High Commissioner in Nigeria Catriona Laing.

Osinbajo’s Spokesman Laolu Akande said the meeting which had the UK High Commissioner was about Nigeria and Africa’s Energy Transition Plan which would is in the works and the need for the COP26 summit to ensure a just and equitable energy transition.

In his address at the Imperial College interaction the Vice President restated Nigeria’s commitment to the Net-Zero emissions target and explained that alongside the target, Nigeria also has a need to bring energy access to scores of million Nigerians and lift 100m out of poverty.

According to him this in part explains why countries like Nigeria will need speedy industrialization that would require continued gas funding. But he expressed concern that western countries and financial institutions where already planning the defunding of gas projects.

At the end of his address and a question and answer session, several students of the College took turns taking selfies and group photos with the VP. (See Amateur Video)

Accompanying the Vice President at the UN organized meetings were the Minister of State for Environment Sharon Ikeazor, Nigeria’s High Commissioner in London Ambassador Sarafa Tunji Ishola, and the Special Adviser to the President on Economic Matters Dr. Adeyemi Dipeolu. The meetings were also attended by United Nations officials led by Special Representative of the Secretary General Damilola Ogunbiyi.