Germany not ‘first in line’ to boost Afghanistan troops 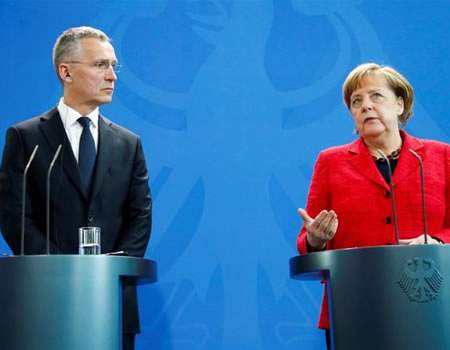 German Chancellor Angela Merkel has said that she does not believe Germany is “first in line” to send more troops to Afghanistan, as NATO considers a proposal to boost forces there.

“I don’t think we’re first in line to expand our capacities there,” Merkel said after meeting with NATO Secretary-General Jens Stoltenberg on Thursday.

She said Germany will continue to lead NATO’s military training mission in northern Afghanistan, adding that she will wait and see the outcome of the alliance’s assessment of a request from military chiefs to send more troops to the country.

“The news conference between Stoltenberg and Merkel was very heavy on warm words, on the appreciation of the role of NATO and the role of Germany, but it was light on specifics regarding whether the Germans would perhaps increase their contingent of troops in Afghanistan,” Kane said.

On Wednesday, Stoltenberg met British Prime Minister Theresa May, a day after reports suggested NATO had asked Britain for more troops a few weeks ago.

He confirmed he had received a request for more troops, but insisted it would not mean a return to combat operations.

“We have received a request from our military authorities to increase our military presence in Afghanistan with a few thousand troops,” Stoltenberg said.

“It will continue to be a train, assist and advise operation,” he added.

Stoltenberg said a decision on the request will be made within weeks and the issue is expected to be high on the agenda at the NATO annual summit in Brussels on May 25.

Since NATO’s combat mission in Afghanistan formally ended in 2014, Taliban attacks have intensified and Afghan military and civilian casualties have risen.

NATO already has some 13,450 troops in Afghanistan, including around 6,900 US and 500 British military personnel, who are training the Afghan armed forces to eventually take over the country’s defence and security.

The US has an additional 1,500 soldiers conducting assist missions directly under Pentagon command.

They have sustained high casualties, up 35 percent in 2016 with 6,800 soldiers and police killed, according to a US watchdog.

In April, the Taliban announced the beginning of its annual “spring offensive” and last week the armed group stormed and seized a district in the vicinity of Kunduz, in northern Afghanistan.

“If you talk to Afghan troops, they say they desperately need the help,” Hendren said. “In the north and south of the country, they are embattled.”

He added that the goal of the idea of a troop increase is to get the Taliban to the negotiating table.

Security analyst Mushtaq Rahim told Al Jazeera that NATO and the international community should focus on the root causes of the conflict in Afghanistan.

“The overall strategy should concentrate on beating the Taliban at the root levels instead of addressing the symptoms of the whole conflict,” Rahim said from Kabul.

Separately, the US administration is reportedly considering deploying more troops to Afghanistan as well. Official sources quoted anonymously by US media said the increase would range from between 3,000 to 5,000 soldiers, including Special Operations forces.

President Donald Trump is expected to receive a proposed new approach to the war this week, according to Theresa Whelan, a Pentagon policy official.

According to the United Nations, 583,000 people have fled their homes as a result of the conflict in 2016, the highest number of displacements since records began in 2008.

Kwara PDP kicks against reconstitution Of TICs For LGs