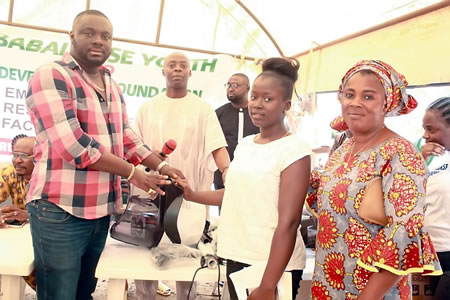 IT was a day of relief for youth artisans in Oyo and Ogun states on Saturday, 17th of August, 2019, when not less than 120 of them received free equipment to boost their businesses courtesy Babalonse Youth and Development Foundation.

Chairman and chief executive officer, Babalonse Youth and Development Foundation, Mr Olalekan Abaopo, told the Nigerian Tribune that: “My dream has ever been to see people smile at all time. With the way things are going in the country, it is evident that people are passing through severe suffering.

“We have been doing this for four years now but it actually became official two years ago when the Foundation was registered with the Corporate Affairs Commission. Let me also inform that aside the youths, we are considering the aged ones, particularly those who cannot really move around like they used to when they were young.

“Some old women would be given chest freezers today, with the freezers they can easily sit down at the comfort of their shops and sell stuffs like soft drinks and sachet water. I believe with the little profit they get from the sales, they should be able to keep body and souls together.”

Asked whether the gesture was to seek political support from the beneficiaries in the near future, Abaopo, stated that he is not planning to venture into politics saying that the gesture was purely humanitarian and nothing more.

Spokesperson of the Foundation, Mr Ayodae Olumide, urged the beneficiaries to make judicious use of the tools given to them for the upliftment of their business.

Legal consultant to the Foundation, Barrister Adewale Ayoade, while addressing the beneficiaries, told them not to consider selling the items as they were strictly meant to be used to make money for themselves. “We have had cases when some people would decide to sell the items given to them. Such action would not encourage the donor to do more. Therefore, I admonish you to use the tools judiciously.”

A guest on the occasion and friend of the donor, Mr Saheed Fowosere, called on the beneficiaries to reciprocate the kind gesture by impacting meaningfully on the lives of their fellow men.

Mrs Folashade Ajayi, a beneficiary of a chest freezer who could not hide her joy thanked the Foundation, saying that the freezer given to her would no measure improve her livelihood.

Another beneficiary, Ogundele Dayo Oluwadamilola, a make-up artsite, while thanking Babalondse Foundation said:”The tool box given to me today would impact meaningfully on my business because as a make-up artiste if you do not have a make-up box, it would be difficult to go for home service. But since I have my box now, I would garner more customers. I really appreciate this gesture.”

Mr Afeez Adesokan, a barber from Oke-Ado area of Ibadan, while appreciating the Foundation prayed that the donor would continue to wax stronger financially.

A hairdresser, Mrs Abiola Aina, while speaking with the Nigerian Tribune, said her knew no bound as she has been looking for how to raise money to buy the tools given to her by the Foundation. She therefore assured the Foundation of effective use of the items.

The beneficiaries were selected after various screening to ascertain the authenticity of their businesses.

Tekno and objectification of women in music videos