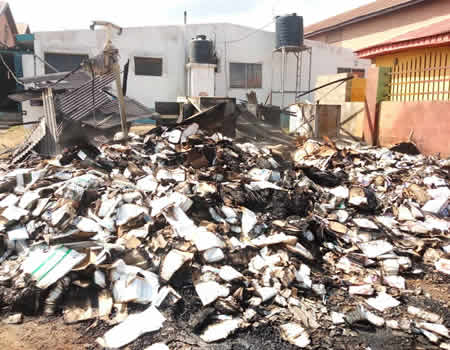 The drug store belonging to the World Health Organisation (WHO) located inside Ayegbaju International market, Osogbo was on Saturday afternoon razed by fire.

Tribune Online authoritatively gathered that the fire outbreak, which occurred around 11.45 am consumed medical disposables, about 8,000 safety boxes, a motorcycle and four generators.

The medical disposables razed by the fire were mainly for the use of the Osun State immunization department, which works in conjunction with the WHO medical officials.

Sources informed our correspondent that the fire outbreak was as a result of power surge from one of the generating sets, which later spread to the drug store and a school building beside Ayegbaju market.

However, the fire was put out by men of Osun State Fire Service and Federal Fire Service, who were assisted by some youths at the scene of the fire incident.

The proprietor of the affected school, Mr Laide Mustapha, stated that he got a distress call around 11:45 am that the building next to his school was on fire, lamenting that some of his properties have been damaged during the process of quenching the fire.

He said, “I got a call from people in the market that the building next to us was on fire and has extended to mine. When I got  here I met people who had already broken into the school to help. Their efforts reduced the extent of the damages.

“However, we lost some things in the process, including our furniture made of fabrics, our air conditions damaged , there were televisions in all the classrooms ten in numbers and all have been damaged, our musical instruments and roofs have been damaged.

“This has weighed me down.  We just put some of these things in place during the break to aid learning”, Mustapha remarked.

COVID-19: WHO warns against use of mask during exercise