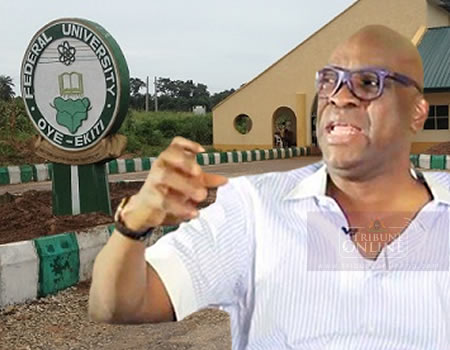 EKITI State Governor, Mr Ayodele Fayose has alleged that Boko Haram has become source of indirect treasury looting; saying “Those benefitting from Internally Displaced Persons (IDPs) scams, payment of ransom (in dollars) to free those abducted by the Boko Haram insurgents, among others will never wish to see the end of the insurgency.”

The governor described the alleged withdrawal of military check-points from Dapchi and other communities, few days before 110 students of Government Girls Science Technical College (GGSTC) were abducted by Boko Haram, as major pointer to possible conspiracy in the abduction of the schoolgirls and other dastardly acts of the insurgents, asking why no one had been questioned up till now despite conflicting claims by the army and police.

In a statement issued on Wednesday, by his Special Assistant on Public Communications and New Media, Lere Olayinka, Governor Fayose insisted that withdrawal of $1 billion from the Excess Crude Account by the federal government was a continuation of the use of fight against the insurgents to fleece the country.

The governor said; “We have heard stories of alleged diversion of foods and relief materials meant for the Internally Displaced Persons (IDPs) in the North-East to Chad and Niger Republic, about 200 tons of dates donated by the Kingdom of Saudi Arabia for distribution to the IDPs sold in the open market in Abuja and most importantly, use of the IDPs camps by top government officials to perpetrate monumental fraud.

“As long as the fight against Boko Haram remains a business venture, providing cheap money for top officials of this government, the insurgency will continue.

ALSO READ: 2019: ‘As long as the Lord lives, I will rule Nigeria,’ says Fayose; cautions against voting Buhari

“In Transparency International’s words; ‘corrupt military officials have been able to benefit from the conflict through the creation of fake defence contracts, the proceeds of which are often laundered abroad in the UK, U.S. and elsewhere.”

“In its own report, the US Department of State’s Bureau for Counterterrorism and Countering Violent Extremism said that the inability of security agencies in Nigeria to share intelligence report because of animosity is affecting the success in the fight against Boko Haram.

“The public disagreement between the army and police over the security arrangements that were in place in Dapchi and other communities in Yobe State a few days before the Boko Haram attack that led to the abduction of the 110 girls has further lent credence to the position of the US Department of State’s Bureau for Counterterrorism and Countering Violent Extremism.

“President Buhari must, therefore, have to look inward and purge his government of those benefitting from the insurgency is indeed he desires that it should end.”