Arts and Culture
By Akintayo Abodunrin On Oct 18, 2020 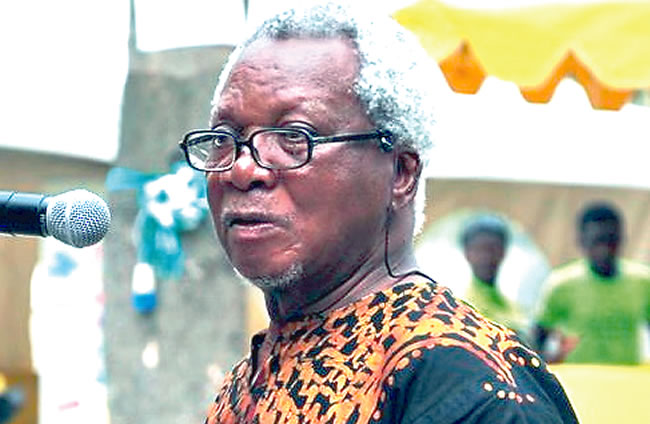 Though elegies are trailing the passing of master wordsmith and academic, Emeritus Professor J.P. Clark, he had been honoured in his lifetime at different fora.

EULOGY is better than elegy,” poet and academic, Professor Niyi Osundare commented in 2018 at the maiden John Pepper Clark International Conference hosted by the University of Lagos.

Convened by Professor Hope Eghagha of the University of Lagos and Dr G. Oty Agbajoh-Laoye, of Monmouth University, USA, the conference in honour of the poet, playwright and teacher from Kiagbodo, Delta State was themed ‘Connecting the Local and Global Across Literary Genres’.

Osundare, who in acknowledging the poet’s impact admitted “Clark showed us how to do it”; was among the many scholars that came to celebrate him and reflect on his works at the occasion.

It was an excellent outing that also featured 55 presentations in panels/roundtables that explored the theme over four-days. Eulogies, expectedly and befittingly, poured in torrents on the author of ‘Night Rain’ at the memorable event that happened two years before he paddled to eternity on ‘The Raft’ on Tuesday, October 13.

“Prof. J. P. Clark has paddled on to the great beyond in comfort of his wife, children and sibling, around him. The family appreciates your prayers at this time,” read the brief statement from his family that hit the literati like a thunderbolt out of a bright sky.

The misunderstood author of poetry collections, ‘A Reed in the Tide’, ‘Casualties’, ‘A Decade of Tongues’, ‘State of the Union’ and ‘Mandela and Other Poems’ had gone the way of all flesh. The author of plays including ‘Song of a Goat’, ‘The Masquerade’, ‘The Raft’, ‘Ozidi’, ‘The Boat’ and a travelogue, ‘America Their America’ had dropped his pen leading to an eruption of grief.

Professor Akachi Ezeigbo in a tribute entitled ‘Our Mentor, Literary and Academic Father Bows Out’ wrote: “Today is a sad one for Nigerian writers, students of literary studies and literary critics. Oh, a literary giant has bowed out of the scene, but his legacy of literary excellence will endure. He lives on in his ample and great works. Professor J. P. Clark taught me at both undergraduate and postgraduate levels at the University of Lagos. He was there when I became a member of staff of the English Department. As students, we were excited and awed to meet him in person in our first year after reading some of his poems in secondary school. Wow! We met him in flesh and blood and became his students and him, our teacher! It was a great feeling. His lovely wife, Professor Ebun Clark, was also our teacher at Unilag. JP was a great poet and dramatist. His poetry is lyrical and has remarkable aesthetic appeal. A writer for all time! May his soul rest in peace.”

On Twitter, Pulitzer Prize winner and founder of the rested NEXT Newspaper, Dele Olojede wrote, “saddened by the passing of playwright and poet John Pepper Clark, whose works formed part of the background music of my youth.”

Even President Muhammadu Buhari knew that a calamity had befallen the literati. He recognised him as “one of Nigeria’s finest poets, dramatist and recipient of the Nigerian National Order of Merit Award for literary excellence, whose repertoire of published works depicts the hard work of a great man, devoted to a lifetime of writing, knowledge and promotion of the indigenous culture of the Ijaw nation.”

Though an enigma whom many perceived as hostile and cantankerous, Professor Clark had a good heart, was a lover of children and creative entrepreneur and outlier. He didn’t mind enervating work as seen with what he and his wife did with PEC Repertory Theatre.

It was therefore befitting that he had been honoured several times before the 2018 grand event and that the eulogies preceded the elegies that will continue to flow following his internment, Thursday, at his country home in Kiagbodo, Delta State.

A meticulous man who abhorred sloppiness, the Professor of Literature, had said he wanted to be buried within three days of his passing and had prepared his grave a long time ago.

With his passing and burial, the tribe of Nigerian literary eminences is further diminished with Nobel Laureate, Professor Wole Soyinka, the sole survivor of the trio that had their roots at the University College, Ibadan. While Clark and Professor Chinua Achebe have transformed into ancestors, the literati continue to drink from Soyinka’s fountain of knowledge.

Born in Kiagbodo, present Delta State in 1935, Professor Clark gained his BA in English at the University College, Ibadan. He was an Information Manager in the Ministry of Information, old Western Region; Features Editor of the Daily Express and later Research Fellow at the Institute of African Studies, the University of Ibadan before moving into academics where he inspired and mentored thousands of students.

Everything in Nigeria needs reform, we will not stop protesting —Davido