Eulogies, dirges for an exemplar 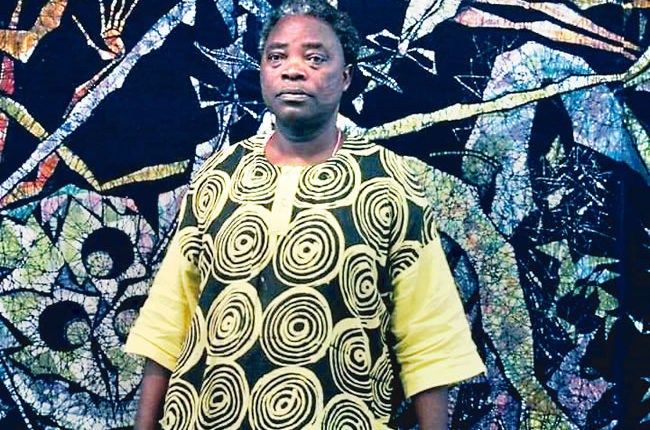 IT was a glorious and befitting farewell for seasoned batik artist, Sango priest and adopted son of the late Susanne Wenger, Chief Sangodare Gbadegesin Ajala, on Friday, November 5, when he was buried in Osogbo, Osun State.

Family, friends, and mentees converged on the residence of the winner of the 2010 National Art Competition to bid him a safe trip on his journey to the ancestors, with a colourful and grand display of Yoruba culture.

Art enthusiasts and eminent players in the art scene also celebrated the rich and impactful life of the artist, Babalawo and Sango priest, whose fame extended beyond Nigeria’s boundary.

Ajala, who had passed on October 29, was the leader of the New Sacred Art Movement founded by his adoptive mother, Wenger. The group was responsible for creating dozens of decades-old artworks in the UNESCO World Heritage Site of Osun Grove in Osogbo.

“The most important part of his legacy was he was a serious religionist as well as artist,” Oyelami noted, stating that the beginning of Ajala’s story was natural, as he was excellent at his art and led an exceptional life as a traditionalist.

“I was in love with the way he lived … not lousy, not noisy,” Oyelami said, adding that despite his belief, Ajala was liberal, accepting and accommodating people with religious beliefs different from his.

“I adored him for being liberal,” the close friend of the late artist pointed out, noting: “He lived for other people. He was a very good and loving person.”

Gomes, who knew the late Sango devotee for 32 years, reflected on the impact he made on her life. “He was the father of everyone. There was never a problem, and if there ever was, he would work hard to solve it,” she said.

“I don’t know anybody like him, and I can’t talk about my life without talking about him. He was a huge part of my life. Simple, honest, he was a very good person.”

Some of the traditional burial rites that marked the ceremony’s beginning were prayers, chants, and sacrifices performed by priests, elders, and the deceased’s family and witnessed by many in attendance.

The observance of these traditional rites, according to Oyaranti Adeoye Ajala, a former trainee of Baba Sangodare, as people called the deceased, was mandatory for the family to ensure his safe departure from this world.

“Baba Sangodare was an olorisa. And when there’s a death of an olorisa, there has to be a sacrifice for the smooth passage of the deceased. Also for his home, family, children and friends so that there will be no problem,” he affirmed, adding that these rites were observed for protection and to ward off evil.

Stressing the importance of the traditional rites, Oyaranti stated that the use of chicken and pigeon in making the sacrifice at the ceremony was symbolic.

“Like Christians use the Bible, we use these things. This sacrifice covers everyone in attendance. It means Ase so that we do not see untimely death, so that we can have peace of mind and so that peace will continue to reign over Baba Sangodare’s family and the town,” Oyaranti said.

Olaifa Akanni, another Sango devotee who was taken under the wing of the late Sango priest, had this to say: “The rites create a path through which the dead can pass to go and rest. These rites will take the dead safely to his place of rest.”

Because the late artist was an ardent Sango worshipper, Akanni maintained, it was only proper for these rites to be performed.

“Every home has its rites, and that is what we have done today. Prayers were held to prevent any harm from coming to his children and family,” he said.

Eulogies, dirges for an icon

The traditional rites were followed by speeches that eulogized the deceased. Priests, both of the Sango and Ogun lineage, from different parts of the country, extolled the late artist for his good works and great virtues.

Odise Orunmole Sangowale  Babalola, who spoke at the ceremony, echoed the words of many, insisting that the late Ajala spoke the truth and stayed true to his word.

Others bore witness to his kind deeds, affirming that he cared about everyone around him and shared his faith and wisdom with people, never letting anyone go astray.

“He was the father of all. If anything was to be done in Ibokun, he was the one who would do it,” Gomes said of the deceased’s eagerness to help.

While noting his unwavering faith in the use of herbs to heal the sick, Gomes praised the Sango priest for the self-sacrificing love he showed people.

Singers chanted dirges and sang praise songs in honour of the artist. Guest speakers read elegies and poems (Ewi), which paid tribute to the late Sango priest. Other activities at the ceremony included bata drumming, dancing and a colourful parade of women, known as Iyawo Ile or wives of the men of the house, who beat the percussion or Ṣẹ̀kẹ̀rẹ̀ as they sang.

There were also renditions by a choir and synchronized bata dancing by the Osun State Cultural Troupe.

Bidding farewell to a man everyone had come to know as “father” was hard. It was indeed heartbreaking for those in attendance to watch the family lead the coffin along with a small group of intimate friends inside the late Ajala’s home for burial.

Dispelling any misconceptions that may have arisen from the argument that the Osun Grove was a befitting place for the late Sango priest to be laid to rest, Doctor Oluseyi Atanda noted, “He is not solely an Osun priest. Even his father was buried in his home.”

Atanda, President of Traditional Religious Worshippers of Osun State, added: “Rarely do we bury priests outside. If a priest should be buried at the grove, as a mark of respect, a house must be built over him.”

How I broke banking jinx in England —Odumboni

A Fork in the Road: Which Way, Nigeria?