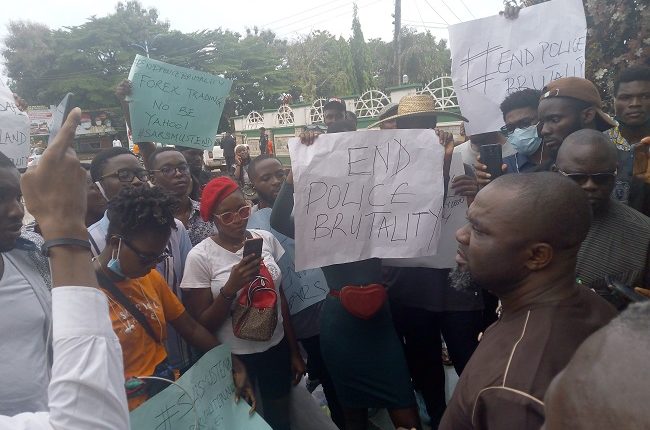 Youths of Ebonyi State have called for the total sack of all officers of the Special Anti-Robbery Squad (SARS), a unit of the Nigeria Police Force.

The youth made the call in Abakaliki while protesting the alleged brutality and extortion by SARS operatives.

The youth besieged the old government house located opposite the state police headquarters, Abakaliki to protest the alleged brutality and extortion by SARS officers.

“We are fighting for our rights and our rights is to end this police brutality because their brutality is affecting every youth in this state. Enough is enough, we want all those who have been found guilty of one crime or the other to be sacked from the police force entirely. We want Ebonyi government to assure us that police in the state would be one of the best in Nigeria,” one of the youths said.

They, however, urged the Inspector-General of Police to give every security member an identity number for easy identification of the bad ones among them.

Addressing the youth on behalf of Governor David Umahi, Commissioner for Internal Security and Border Peace, Hon. Stanley Okoro-Emeagha, condemned the brutality and commended the youth for taking such measures to end police brutality and extortion.

“To scrap out SARS, I believe, is a welcome one that made the IGP scrap them on the instructions of the President.

“They were not sacked rather a name was cleaned up and then there is going to be a reform to clear complains from the masses against the police.

“I want us to know that society cannot live without adequate security. We are talking about the areas they don’t do well because we know they are doing wonderfully well to give us protection. Only few of them are not doing well.

“Your agitation is welcome but know that the governor and his deputy that you are waiting for are not in town,” he said.