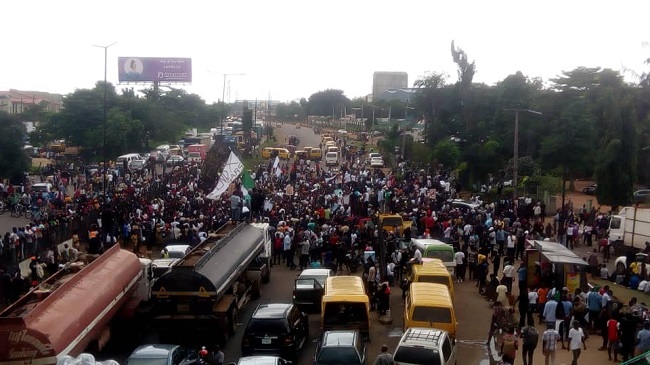 Many Nigerian youths protesting against police brutality in Lagos barricaded the Lagos-Ibadan expressway on Tuesday.

The protesters also blocked all major roads preventing exit and entry into the state via the expressway.

The demonstration had youths in their hundreds gathered at different locations in the state to demand police reform after the proscription of the SARS police unit.

The young people moved out in groups along the Secretariat Road in Alausa, and later gathered and blocked the expressway.

They were seen holding different banners with loud inscriptions calling for the police reform, “No to bad governance, no to corruption, No to all forms of banditry and kidnapping.

The protests started in Lagos on Thursday, as Nigerian youths took to the streets to air their frustration.

On Friday, the protesters took off from the Lagos State House of Assembly at Alausa and proceeded to Allen roundabout.

They maintained that they were not asking for a reformation of the SARS outfit, but a complete proscription of that unit.