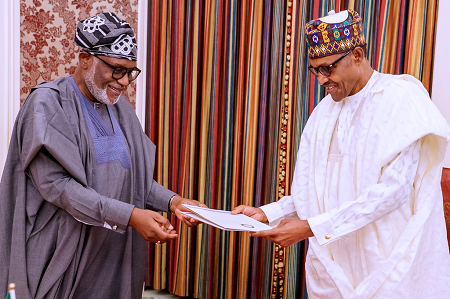 All Progressive Congress (APC) governors are in the presidential villa, Abuja to present the newly re-elected governor of Ondo State, Rotimi Akeredolu and his deputy governor-elect, Lucky Ayedatiwa, to President Muhammadu Buhari.

Akeredolu and Ayedatiwa were led by the chairman of the party’s National Caretaker Committee and Yobe State governor, Mai Bala Buni.

Ondo: Resign if you have honour, Akeredolu tells deputy, Ajayi