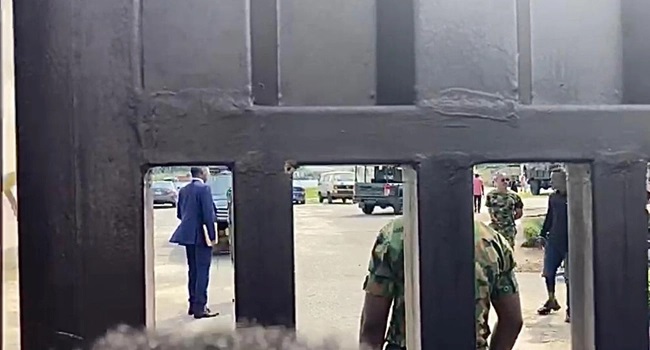 Members of the Lagos State Judicial Panel of Inquiry into the shooting of #EndSARS protesters paid an unscheduled visit to the Military Hospital mortuary in Ikoyi to verify claims that some protesters that were allegedly killed by soldiers at the Lekki toll gate were kept there.

However, members of the Justice Doris Okuwobi-led panel were stopped from having access to the mortuary after spending some minutes at the premises of the hospital.

Explaining the mission of the panel to the soldiers, a member of the panel, Mr Ebun-olu Adegoruwa, said the panel was on a fact-finding mission to the hospital.

He stated that although the panel didn’t have evidence that shows that corpses of the protesters were kept at the military morgue, it had vital information that could help the panel in its investigation.

“We are following the due processes. It is important we visit the mortuary as it will help our findings. We have a pathologist. We are here on the authority of the president, not only the governor but if we are not allowed access, we will go back and take other actions.

“We won’t force ourselves in. We heard this hospital is controlled by 65 Battalion and under the 81 Division. We are also taking steps to reach military authorities.”

After some minutes of contact calls, the panel was eventually conducted round the hospital by Brigadier General A.I Taiwo who told the panel that the hospital is currently under renovation.

The party also said that immediately the Caretaker/Extraordinary Convention Planning Committee was put in place after the NWC’s dissolution, the crises that had characterised its affairs were laid to rest. Lagos Judicial Panel

The Emir of Zazzau, in Kaduna State, Alhaji Shehu Idris has died in his palace at the age of 84. Lagos Judicial Panel

His son, Aminu Shehu Idris, confirmed in an interview with the Tribune Online that his late father who was appointed on 15th February, 1975 and spent 45 years in the throne died on Sunday after a protracted illness. Lagos Judicial Panel