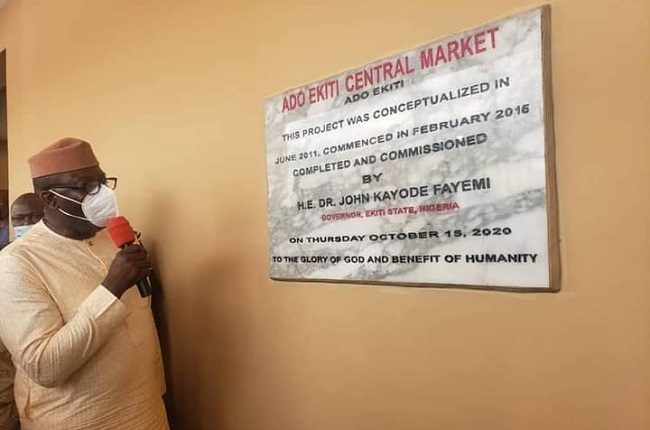 He noted that payment of taxes by residents is crucial for the government to maintain infrastructures and give back more dividends of democracy to the people.

Fayemi also, on Thursday, commissioned the new Model College in the name of an illustrious son of the state and second republic senator, Professor Banji Akintoye.

The governor who inaugurated the market as part of activities marking the second anniversary of his administration said his government conceptualised the project in 2011 during his first term as part of the urban regeneration programme for the state capital.

He, however, commended former Governor Ayo Fayose for the continuation of the project to 55 per cent completion, pointing out that the market would promote commercial activities on a large scale and boost economic development in the state.

According to him, “This project was conceived and purposely built to make trading more conducive, encouraging and enjoyable for our traders. Therefore, with this development, I expect the traders who display their wares by the roadsides to desist from such practice and move into this more comfortable and secure edifice. If they obey this, there would be a free flow of traffic at the popular Oja Oba and Oja Bisi areas of Ado Ekiti. I urge the traders and marketers who are the major beneficiaries of this project to cooperate with the government while making use of the facilities.

“With what we have done so far, it is pertinent to state here that, payment of taxes and levies into the government coffers is important for the sustenance of developmental drive. This will allow us as a government to continue to maintain the infrastructure and attend to other important needs of the State. Indeed, in order to ensure the sustained maintenance of this infrastructure, plans are already afoot to engage professional facility managers to take responsibility for the running of the market.”

Fayemi said the facilities in the ultra-modern market include 234 Open Shops, 738 Lockup shops, 2 restaurants, 2 banking halls, 2 Warehouses, a Police Post, a fire station and a clinic.

The Ewi of Ado-Ekiti, Oba Rufus Adejugbe, expressed his appreciation to the governor for keeping to his promise by completing the project, appealing to all users of the market to make proper use of the edifice.

Fayemi while speaking at the commissioning of the Banji Akintoye Model College said construction of the new school was important to bridge the gap and deficit in the area of infrastructure in public schools in the state.

“This Commissioning of this College gladdens my heart because after our inauguration in October 2018, one of the issues that became our serious concern was education. What we met on ground was nothing to write home about and as a government, we swung into action. Most of the schools, especially in Ado Ekiti were overpopulated while many of the pupils studied sitting on the floors in dilapidated classrooms. It was very clear that something needed to be done to right the obvious wrongs. The creation of these new schools, therefore, was a dream come true for the pupils and teachers, even more for the government,” the governor said.

Fayemi advised parents to enrol their wards in public schools, saying the government is doing everything possible towards making public schools more attractive and affordable.