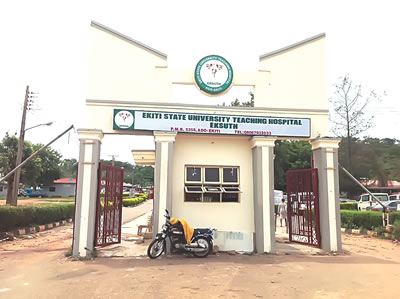 The vice chancellor of the Ekiti State University (EKSU), Ado-Ekiti, Professor Eddy Olanipekun, has disclosed that the university has paid over N200 million to the coffers of the state’s Internal Revenue Service out of the unremitted tax he inherited from his predecessor, Professor Samuel Oye Bandele.

Olanipekun faulted the claim by the Academic Staff Union of Universities (ASUU) that the current governing council led by Professor Tale Omole lacks the capacity to turn around the institution and to resolve some of the problems confronting it.

ASUU had recently accused the management and governing council of incompetence in the running of the university, among other damning allegations bordering on fraud it raised against the authorities.

Olanipekun, in a statement signed by the Director of Information and head of Corporate Affairs, Bode Olofinmuagun, clarified that the COVID -19 pandemic had brought a shortfall in the finances of the institution and caused inability to meet some of its obligations to the staff.

“It is a well known fact that Professor Samuel Oye Bandele as vice chancellor did not remit these Pay As You Earn (PAYE) deductions to the Internal Revenue Service during his tenure.

“However, the present leadership of the university has paid N203,206,812.62 to the coffers of Ekiti State Inland Revenue Service since its inception to date,” he said.

Olanipekun insisted that the pro-chancellor and chairman of council had demonstrated uncommon dexterity in the payment of N1.368 billion out of the inherited N1.914 cooperative deductions from the immediate past administration.

He added: “For the records, it should be noted that the current governing council which was inaugurated on January 28, 2019 met the sum of N1, 914,867,338.00 as accumulated unpaid cooperative money owed members of staff by the previous administration.

“Within a year, a sum of N1,368,008,446.74 was paid to offset part of the accumulated debts arising from the unpaid cooperative deductions.

“Again, unlike what it met on ground prior to its inauguration, this current council  has ensured that staff gross salaries were paid as and when due until the advent of the COVID-19 pandemic which has negatively affected the finances of the university.”

Olanipekun maintained that Governor Kayode Fayemi is committed to making the university a real citadel of learning, and that his government had released over N32 million to facilitate the accreditation of the MBBS programme which had been neglected for many years.

“Governor Fayemi also donated a 32-seater bus to the College of Medicine to meet part of the requirements for the accreditation of the medical programme.

“Government released a sum of N50 million to facilitate and purchase of necessary equipment for the accreditation of 18 undergraduate and postgraduate programmes of the university that were presented to the National Universities Commission in November/December, 2019. All the programmes had full accreditation.

“Sadly, the recent inability of the university to meet part of its financial obligations, especially the non-remittance of some salary-related deductions, is not unconnected with the lockdown which has seriously affected the internally generated revenue of the university.”