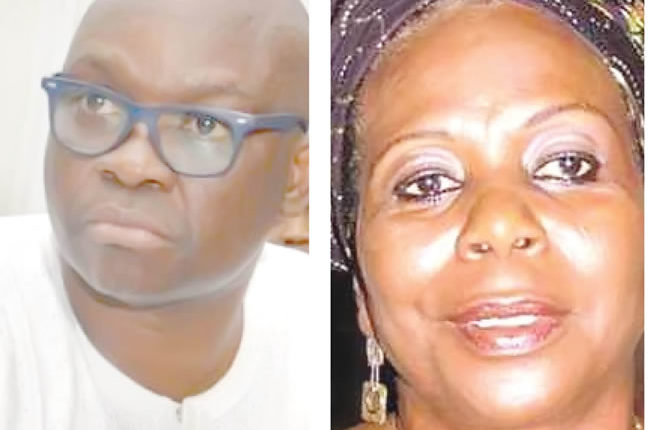 Ahead of the June 18, 2022 governorship election in Ekiti State, gladiators in the opposition People’s Democratic Party (PDP) may have agreed to sheathe their sword and embrace peace. YOMI AYELESO reports that the arrowheads of the crisis: former governor, Ayo Fayose and Senator Biodun Olujimi with members of their group met three times in the last two weeks in a bid to reach a truce before the poll.

Less than two weeks to the governorship primary of the PDP in Ekiti State, events in the last few weeks within the party have clearly suggested that the gladiators and leaders who were hitherto at loggerheads over the party’s structures are edging towards resolving their differences.

The party which lost power to the All Progressives Congress (APC) in 2018, had been enmeshed in leadership crisis which has defied all troubleshooting efforts by zonal and national leadership in the last few years. Those at the centre of the schism are a former governor of the state, Ayodele Fayose and the lawmaker representing Ekiti South senatorial district, Senator Biodun Olujimi.

The rivalry them on who controls the structures dated to 2019 in the buildup to the general election. To Olujimi, who is unarguably one of the strongest female politician in Nigeria being the highest political office holder in the party from the state, she should assume the leadership of the party, while Fayose who had completed his term as governor, disagreed with the former Senate Minority Leader on this and vowed to remain relevant and be in charge.

Olujimi argued that since the party  lost power in 2018, the repositioning group was financing and galvanising support for the party, which she said was allegedly abandoned by Fayose at that time.

Thes brickbat led to the duo settling up parallel campaign structures for the Atiku/Obi presidential campaign committee in the state, which many said resulted in the poor performance of the PDP during the presidential poll in Ekiti Fayose went on a radio station and did a video that went viral days to the senatorial election, calling on the electorate in Ekiti South not to vote Olujimi, candidate of his party at the poll. Olujimi lost at the poll but fortune and fate conspired to give her the mandate through the court.

The fisticuffs between the duo reached a crescendo during the party’s ward, local government and state congresses in 2020, when they conducted parallel exercises. The leaders held their congresses at different venues and produced factional executives across board.

Party members, especially those from the Olujimi camp called the Repositioning Group, were left dejected when the then National Working Committee (NWC) under the leadership of Uche Secondus disregarded the concerns of the group and of bias accepted the list of executives from the Fayose camp. They have since been running the affairs of the party from the ward, local government and state levels.

The repositioning group instituted a suit at the Ado-Ekiti division of the Federal High Court, praying the court to set aside the congresses of the Fayose group and uphold theirs. The court, however threw out the case and urged the parties to the suit to resolve their internal crisis.

The group approached the Appeal Court to seek redress but the court also upheld the decision of the lower court. Determined to explore all legal means available, the group is currently before the Supreme Court over the 2020 congresses. All efforts by the immediate past NWC for the Olujimi group to withdraw the suit, had been unsuccessful.

This clear infighting between the leaders has negatively affected the party from playing its roles of opposition to the APC. There is little or no activities at the party secretariat being occupied by the Fayose backed executives.

However, ahead of the primary slated for January 26 leading up to the June 18 governorship poll, the duo appears to be forming a common front in a bid to secure victory for the opposition party at the poll. Already, there are 17 aspirants who obtained the nomination form and had been screened to contest, including Olujimi. Fayose is backing the ambition of Bisi Kolawole, the party chairman, who resigned to pursue his governorship bid.

Since the inauguration of the Senator Iyorchia Ayu-led NWC in December last year, the leadership has held a series of meetings with the two camps, urging them to close ranks and form a formidable front towards dislodging the ruling party in the state. The national publicity secretary of the party, Debo Ologunagba after a meeting with the gladiators in Abuja recently, said the NWC would go the whole distance to ensure unity among its stakeholders and members in the state. According to him, “All stakeholders agreed to work together in the process. We have agreed that the parties that are involved in it should get back to Ekiti and apply an Ekiti Formula for the resolution of the issues, meaning they will go back and meet privately, discuss all issues that were raised at the meeting and then report back to the National working Committee and the committee.

“We are able to come up with an understanding that there is need for us as a party to be united in Ekiti for the interest of the party and particularly for the interest of Nigerians, because you know Nigerians look forward to PDP to create hope for them in the next election cycle and for that reason, we have resolved as a party to stay united in Ekiti. The areas of crisis and resolutions are coming closer and expect that at the end of their meetings, we will have a good story to tell about Ekiti State.”

Expectedly, the groups have been meeting both in Lagos and Ado-Ekiti. Infact, they met three times in the last two weeks in a renewed vigour to resolve their differences. Far-reaching decisions were taken in the engagements with indications that the two leaders and their camps might be working together going into the January 26 primariy

In a joint statement after their last meeting on Sunday, Fayose and Olujimi›s group resolved and reaffirmed their readiness to work together ahead of the elections. The statement read: “The two groups once again want to reassure the entire PDP members in Ekiti State in particular, that the ongoing talks and reconciliation will lead us all to the desired victory. The groups admonished all stakeholders to embrace peace before, during and after the primaries. While thanking our national chairman and the entire National Working Committee (NWC) members for their immense support so far, we want to assure the leaders that we are committed to the understanding we had with the party.”

Speaking with the Nigerian Tribune, the 2018 deputy governorship candidate of the party, Deji Ogunsakin, who was part of the meetings by the leaders, said the groups resolved to work together ahead of the primary to produce a formidable candidate for the PDP. Ogunsakin, from the Fayose group, noted that the the former governor and Olujimi had been close allies, saying the outcomes of the meetings put to the fore that they would work together to secure victory for the opposition party in the June 18 poll.

According to him, “As you aware, I have been part of these meetings between our leaders. Everybody knows that the two leaders are the arrowheads of the PDP in Ekiti State. In the party’s wisdom and for us to win, we need them to work together. They have been working together but just to bring back the old ways of their collaboration. Senator Olujimi has been Governor Fayose’s sally. I can tell you that the meetings have been positive; one thing we both agreed is that it is only one person that will be the party’s candidate. A group will produce the governorship candidate and the other produce the deputy governorship candidate, all interests will be taken care of; that is the fact.”

On the allegations that the duo were teeming up to scuttle the ambition of Segun Oni in his quest to get the party›s ticket, Ogunsakin said the former governor was not in the picture of things, due to the fact he recently joined the party.

“The coming together is not to work against Segun Oni or any other person. The truth of the matter is everybody has interest, including me. I am an aspirant including others. These people have been working for the party for years with their resources, including the congresses. The issue is, Segun Oni did not participate in the congresses because he joined the party lately; he doesn’t have the structure of the party. He came in last year and he wants to be governor this year, that is not done.Are you saying other aspirants, including Olujimi should bury their ambition because of someone who doesn’t have the structure? It is not about working against anyone.”

On his part, Senator Duro Faseyi said the meetings by the groups were aimed at ensuring a successful outing for the opposition party in the June 18 poll. Faseyi, who is of the Olujimi’s group, noted that though there has been no definite resolution and agreement on the contentious congresses, he expressed optimism that all issues would be resolved before the primary.

On the alleged gang-up against the ambition of Oni, he said: There might be personal issues here and there but I am not aware of that at all because the collaboration is not against him or any other person. There is nothing like that.”

Already, the coming together of the dominant groups within the Ekiti PDP, is causing apprehension in the camps of members, especially the aspirants. Some believe the duo working together at the primary would constitute a great danger to their aspirations.

Already, Oni held a close-door meeting with Olujimi two days ago. Though details of their discussions were not made public, sources claimed that the former governor met with the senator in view of the recent developments.

As the gladiators and aspirants prepare for the primary, one thing is clear; to negotiation will continue and compromise cannot be ruled out.