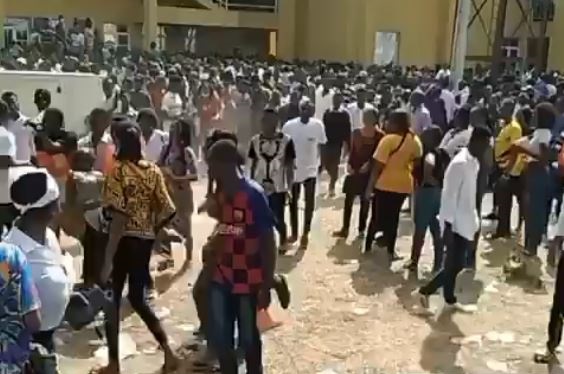 About eight students of the Ebonyi State University (EBSU) slumped in a stampede that occurred during an examination at the permanent site of the institution.

The stampede occurred as students rushed to access the school’s ICT centre slated to write their GST exam.

A source in the institution said the university had adopted the Computer Based Test (CBT) for some General Studies Program (GST) courses.

The GST are courses taken by all students of the institution irrespective of the department or faculty.

The source said the hall was too small for the mammoth crowd of students from 10 faculties that were to write the exam as they were told to come to the permanent site to write the said exam.

“There was poor planning of the exams. The hall had just about 500 computers and the students to write the exams were over 1000,” the source said.

The source added that the university administration should have staggered the exams so that the hall will not be crowded but they failed to do so.

The source noted further that at least eight students collapsed in the course of struggling to go inside the one-room ICT hall to write the exam.

“The worst part of it was that there was no medical centre to take these students who were already struggling for survival,” the source said.

Reacting to the incident, the SUG President of the institution, Samson Abanni, expressed deep regret at the incident which he described as totally avoidable.

“As leaders and firstly students, the SUG shares in the pain of all EBSU students and on this note we assure everyone that never again will EBSU students under our leadership be made to go through such horror in the name of writing any exam or undertaking any academic activity including experiences with the consultancy unit of the university”

“The planning could have been better, to prevent the mayhem that was recorded today. I am personally sorry for all who got hurt in any way.”

He implored the students to remain calm until a confirmation is made over the rumoured death.

Meanwhile, the students of the institution have embarked on a protest to demand the abolishment of the Computer Based Test (CBT) centre.

The students barricaded the Abakaliki-Enugu Expressway preventing motorists from plying the road for several hours.

It took the intervention of the Deputy Governor, Dr Kelechi Igwe, who immediately went to the scene to open up the road.

Dr Igwe told the students that he has noted their demands and assured it will be given immediate attention.

He advised them not to take laws into their hands since the present administration is always sensitive to the yearnings and aspirations of people especially students.

Meanwhile, the Public Relation Officer, Mr. Patrick Utomo, said “the management of Ebonyi State University has noted with concern, the unfortunate incident which took place during the GST examinations on Wednesday, February 10, 2021.

“Management regrets the inconveniences caused by the technical hitches during the said examination which led to delays and crowding of the centre. However, we are grateful that no life was lost in the process.

“The university authorities have noted the issues raised by the students and assure all concerned that they will be addressed as soon as possible.

“We equally regret the subsequent protest by students of the university who barricaded the Abakaliki-Enugu Highway and obstructed vehicular movements for several hours.

“EBSU management offers our unreserved and deep apologies to the general public and travellers who were affected in one way or the other.”