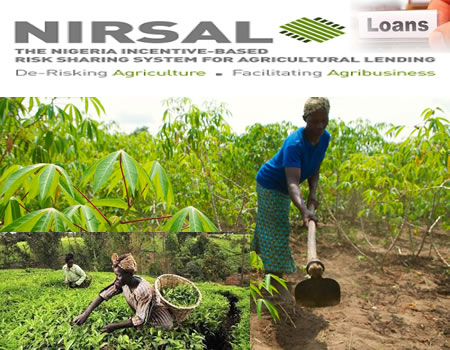 Managing Director, Nigerian Incentive-Based Risk Sharing System for Agricultural Lending, (NIRSAL PLC), on Thursday, disclosed that the company facilitated over N148billion in finance and investments for agriculture and agribusiness in the last one year.

Giving an account of the operations of NIRSAL in the last 13 months, Abdulhameed, disclosed that NIRSAL also aggregated over 3,000 agro geo-cooperatives with 500,000 farmers on nearly 800,000 hectares of land.

According to him, “In the course of the last 13 months, we facilitated the flow of over N30billion into agricultural value chains from commercial banks and other sources.

“Even though our operations suffered a stall during the lockdown of 2020, our technological depth gave us a pathway to return to work while remaining safe and socially-distanced.

“As you know, it was important to continue, even increase, food and raw materials production as the pandemic bit harder.

“As enablers of actors in the agricultural value chain, we remained operational for those who were allowed by the Federal Government to move around for the purpose of producing food and rendering essential services in the society.

“By remaining operational, our numbers grew: As at Q4 2020, we had achieved the following: Facilitated over N148billion in finance and investments for agriculture and agribusiness, and enrolled 1.4 million persons into innovative insurance products designed by NIRSAL in collaboration with a consortium of agricultural insurance underwriters.”

He explained that although NIRSAL is a wholly-owned company of Central Bank of Nigeria, that the organization had grown its balance sheet to N140billion, equity by 1,415 per cent and total assets by 87 per cent through prudent management of its resources without making any recourse to CBN since it took off in 2016.

“We have less than one per cent default. This is made possible because we have a system in which we have Project Monitoring Reporting and Remediation Offices in all 36 states of the federation and Abuja.

“What the officers do is to closely monitor the progress of the beneficiaries of the facilities to ensure that the projects, succeed.

“We are no like banks that would give loans and then sit in their offices, waiting for the customers to repay the loans at the end of their businesses. Our officers go to the farms and monitor the progress of the activities.

“By doing so, they can easily identify any problem that may arise and address it before it can take a toll on the business. If a poultry farm is meant to produce a particular number of egg, for instance, if the number of eggs is less, the officer will meet the farmer and ask such questions as; why are the birds not laying the number of eggs expected of them? Are they well-fed?

“Are the birds dying? Are they properly vaccinated? These officers report daily.”

He explained that NIRSAL has been undertaking a revolution in the nation’s rural economy, by attracting private capital into the agricultural sector, as well as, agri-business.

He said that if the rural economy was rich, rural dwellers would make enough money to live comfortable lives. It would reduce rural-urban migration and the pressure on cities would be less; while banditry, kidnapping on the highways and other forms of criminality would reduce to the barest minimum.

Aside from creating employment and wealth, the NIRSAL boss declared that massive agriculture would reduce the menace of insecurity because there would no longer be hiding places.