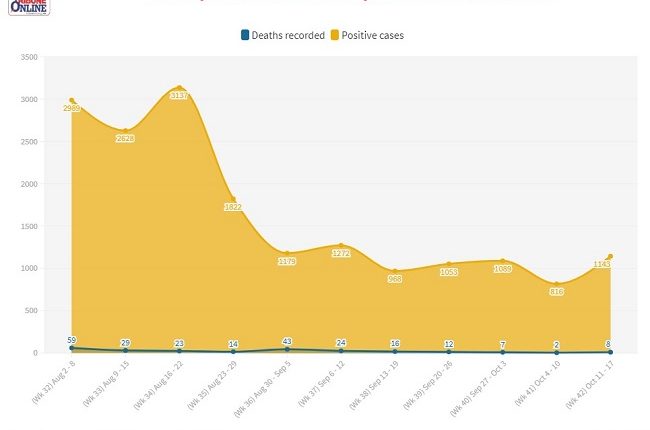 A total of 4,850 persons recovered from the virus and were discharged last week compared to the 993 persons discharged in the previous week which shows there is an increase.

Tribune Online analysis shows that a total of 1,143 new infections were recorded in last week which marked the 42nd week of the pandemic.

Last week, eight persons died of COVID-19 complications, an increase compared to the 2 deaths of the previous week.

‘Possibility of a second wave of infection’

The Presidential Task Force (PTF) on the COVID-19 pandemic has warned of the possibility of a second wave of infection in the country given what is currently going on in other countries in Europe and the United States.

The chairman, Boss Mustapha, said: “The PTF is glad that the economy is opening-up the more, but warns that as we continue to study developments in Europe and other parts of the world, no nation can be said to be immune to a possible second-wave if the guidelines and protocols are not adhered to strictly. Nigerians need to anticipate this and prepare. Our hope and prayers are that it shall never happen.”

On Sunday, 163 new cases of COVID-19 were reported in the country, bringing the total number of confirmed cases to 60,266.

On Monday, 164 new cases of the pandemic were reported in the country, taking the total to 60,430.

On Wednesday, 179 new cases of COVID-19 were reported in the country.

On Thursday, 148 new cases were reported in Nigeria.

On Friday, 151 new cases of the pandemic were recorded.

On Saturday, 113 new cases were reported in Nigeria, bringing the total number of confirmed cases to 61,307.