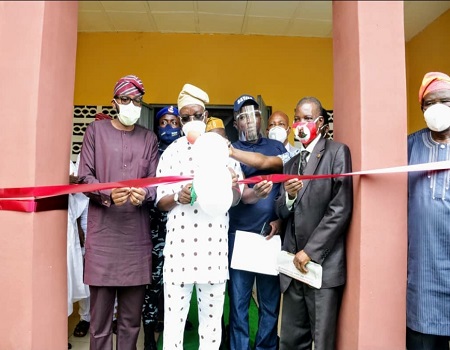 Makinde, represented by his deputy, Mr Rauf Olaniyan, said the isolation centre was in complementing the state government’s effort to tackle COVID-19.

He noted that the isolation centre was modelled to also serve as a cottage primary health centre after COVID-19 is sufficiently tackled.

It will be recalled that Makinde also recently inaugurated the upgraded Agbami isolation centre to add to the existing Infectious Diseases Centre, Olodo.

While enjoining residents of the state to adhere to COVID-19 protocols, Makinde said the isolation centre will help to reduce community spread and transmission, contact tracing and active case searching.

He reminded citizens to take responsibility for their actions, assuring that the government will keep working to improve access to healthcare facilities.

Speaking further, Makinde called on stakeholders to collaborate with the government to improve healthcare delivery in the state.

He further avowed the commitment of the government to revamping dilapidated healthcare machinery in the state.

Also speaking at the event, state Commissioner for Health, Dr Bashir Bello said plans were ongoing to site isolation centres in all parts of the state especially Ogbomosho, Saki and other parts of Oke-ogun.

In his remarks, member representing Afijio constituency in the Oyo state House of Assembly, Honorable Seyi Adisa appreciated the efforts of the Seyi Makinde administration for not leaving the centre to waste away.

He decried that the centre had been deserted for years since it was first built in 2004.

Conducting a tour of the facility, head of isolation centres in the state, Prof Temitope Alonge said the hospital has oxygen concentrator, nebulizers, personal protective kits for workers.

My wife charges me money for s*x, man tells court