COVID-19: 1 Journalist, 43 others test positive as one death was recorded in Bauchi 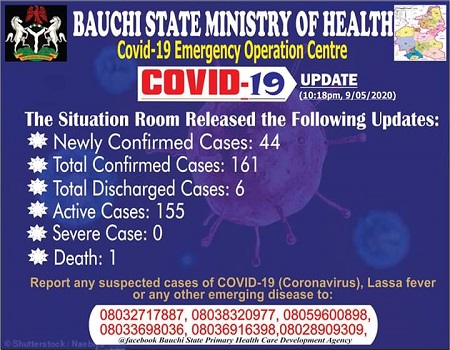 It has been confirmed that as at Saturday, 9th May 2020, Bauchi State recorded 44 new positive cases of COVID-19 infection including one working Journalist whose identity was not disclosed as well as one death due to COVID-19 infection complications.

The confirmation was made public by the Surveillance Team of the Bauchi State Task Force on COVID-19 headed by the Executive Chairman of Bauchi State Primary Health Care Development Agency, (BASPHCDA), Dr Rilwanu Mohammed which stated that the 44 fresh confirmed cases was revealed after they tested positive by the Nigeria Centre for Disease Control (NCDC).

The Surveillance team explained that the development was out of the 117 returning results investigated while 8 are still pending at the NCDC assuring however that the state is intensifying Contact Tracing and samples collection while the state Surveillance Team will continue to isolate all suspected cases where necessary.

In summary, so far 824 contacts have been line listed and will continue to be monitored stating that “We recorded 1 death as other patients are responding to treatment.”

Rilwanu Mohammed added that “The Case Management Team have been properly managing the 155 hospitalized cases at the ATBU Teaching Hospital, FMC Azare as well as Specialist Hospital Bauchi while the General Hospital Bayara remains the isolation centre for any suspected case.”

Rilwanu Mohammed then disclosed that the State Governor, Sen Bala Mohammed Abdulkadir has graciously agreed to foot the bill of status testing by all working Journalists in the state as well as their treatment if tested to be positive of the virus.

He then encouraged the journalists to volunteer themselves for sample testing to enable them to know their COVID-19 status saying that, “testing positive of COVID-19 infection is not a death sentence but a means to healthy living”.

As soon as the announcement was made that one Journalist had tested positive, there was apprehension among the Journalists who were at the Banquet Hall of the Government House for the COVID-19 update briefing.