Coronavirus or not, African migrants desperately push on in the desert towards Europe 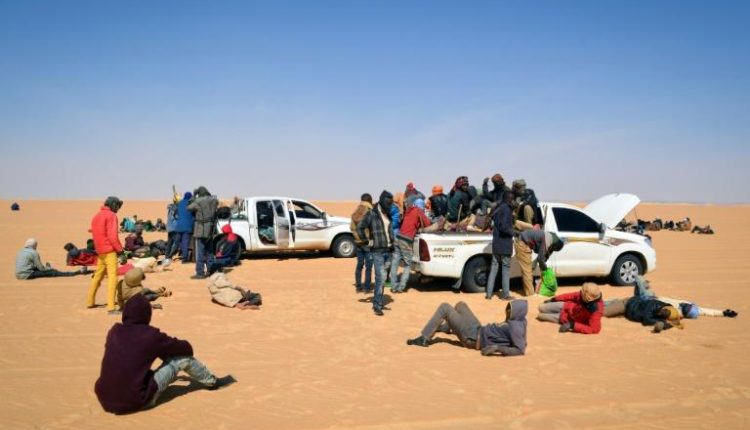 Many Africans are managing to evade coronavirus lockdown barriers in Niger, the Sahel’s migrant crossroads, as they press on with their perilous desert trek to the Mediterranean Sea and ultimately Europe.

The migrant flow has slowed down but not dried up despite tight checks in the capital Niamey, and an increase of desert security patrols that have detained hundreds of people as desperate as ever to reach Europe, officials and former smugglers said.

“Gambians, Senegalese, Malians, they are all determined to head there,” said Alassane Mamane, a retired civil servent who lives in Agadez, a desert crossroads and departure point for many migrants heading to Libya on the Mediterranean.

“One migrant said to me: ‘I would rather die from coronavirus than live in misery,” Mamane said.

Slipping through the holes of the net is becoming increasingly difficult.

Since the anti-migrant plan set up in 2015 to reinforce patrols, security forces “have intensified further their surveillance to enforce border closing measures aimed at fighting the coronavirus,” a local official said.

Former people smuggler Idrissa Salifou confirmed it was now much harder for migrants.

“Before we could cross little by little but because of the anti-coronavirus measures (like border closures), the road is really blocked,” Salifou said.

“Soldiers comb the entire length of the border day and night. And on the other side, the Libyans have become very vigilant,” he said.

Niger, one of the world’s poorest countries, has officially only recorded 781 coronavirus infections, with 42 people who have died from the COVID-19 disease.

Niger has already decreed a state of emergency, closed its borders with Libya and its other neighbours as well as cut off the capital Niamey from the rest of the country.

Libya, where migrants have suffered from the violence and lawlessness that followed Moamer Kadhafi’s overthrow in 2011, is also affected by the coronavirus.

Nonetheless, migrants are heading to the Niger border communities Dirkou and Madama in hopes of entering Libya but measures have been taken to block them, according to Bourkari Mamane, the mayor of Agadez, a large town in northern Niger.

But the flow is far from drying up.

Migrants “are trying in large numbers to enter Libya. They manage to skirt the checkpoints. The unlucky ones are picked up by military patrols,” Boubakar Jerome, the mayor of Dirkou, a city close to Libya, told AFP.

In less than two months, more than 300 migrants have been caught by Niger’s army along the border with Libya, the mayor said.

In the past week, 33 migrants were detained in the same area, the mayor said.

Bachir Amma, who heads an association of former people smugglers, said the migrants are as determined as ever.

“They don’t care about the coronavirus. In Agadez, some ‘ghettos’ have reopened and the migrants look for any chance to bound into the desert,” Amma said.

The “ghettoes” are courtyards of buildings where migrants are housed.

Idrissa Salifou, the former people smuggler, said: “Recently around 60 vehicles transporting migrants managed to enter Libya, but they were quickly picked up by Libyan border guards who drove them to a city in that country.”

In Niger, migrants who are detained or rescued in the desert are placed in quarantine for 14 days at temporary sites in the north where the International Office of Migration (IOM) has welcomed 1,600 migrants stranded in the desert since borders were closed at the end of March.

For example, 764 migrants — including 391 from Niger, 140 from Mali and 101 from Guinea — have been put in quarantine in Assamaka, on the border with Algeria.

Among them are children, pregnant women and injured peope, the UN agency said.

“As soon as they emerge from isolation, some migrants try their luck again,” Boubakar Jerome said.

Last week, the UN agency launched an urgent appeal to donors for supplmentary aid of 10 million dollars to meet the needs of migrants.

It said it has rented extra facilities and reinforced prevention measures in six transit centres which are currently at the maximum cacapity.

In a bid to discourage smugglers, the government in Niamey adopted a law in 2015 to make migrant smuggling a crime, with sentences of up to 30 years in prison.

At the start of 2019, Niger President Mahamadou Issoufou credited the anti-migrant plan, backed by the European Union, with causing the number of migrants passing through Niger to drop sharply from 100,000 to 150,000 a year before 2016 to 5,000 and 10,000 migrants per year today.

During a visit to Niamey the same year, Italian Prime Minister Giuseppe Conte hailed an 80 percent reduction in 2018 of clandestine migrant arrivals on Italian shores.

More than the desert patrols, the game changer has been the decision to cut Niamey off from the rest of the country by banning anyone from entering or leaving without permission.

Many migrants from west Africa used to travel through Niamey before heading to Agadez or the desert gateways.

“With Niamey cut off, more and more migrants changed their itinerary: they now travel through Nigeria whose borders are more porous,” said Bachir Amma, the former smuggler.

Boubakar Jerome, the mayor of Dirkou, agrees: “There exist one thousand and one routes: some of the lucky ones manage to weave their way into Libya.”