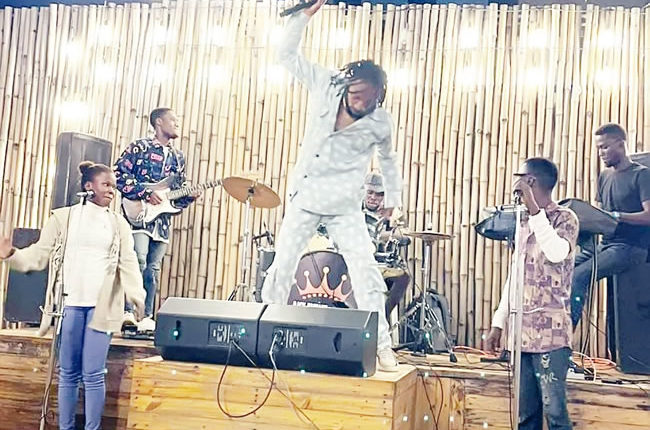 Fast-rising rap artiste, Chidiebere Kalu, whose stage name is Chidey, has demonstrated that he was born to do music in his first live in musical concert, which took place recently at the Johnny Rockets, Victoria Island, Lagos.

The concert began with a red carpet event at 5pm, while the main event started at 7pm and was made up of three electrifying sets, where Chidey performed with his band and got guests in attendance vibing to each song.

In the first set, Chidey performed his songs, which include, ‘Children of a lesser god,’ ‘Ifesinachi’ and ‘I got drunk in FESTAC’, which he did with Deoceezy.

In the second set, he performed ‘Jack and Rose’ with the amiable Celia, ‘Phyno,’ ‘Super story’ and ‘Balanciaofuma.’

In the last set, Chidey thrilled the audience with a performance of songs from seven Nigerian artistes whom he grew up listening to and admiring. He said the songs were a source of encouragement and motivation to him as an artiste. They include; ‘No lele’ by Wizkid; ‘NfanaIbaga’ by 2Face; ‘To be a man’ by Flavour; ‘Man of the year’ by Phyno; ‘Undisputed’ by M.I; ‘Superstar’ by Ice Prince and ’10 over 10’ by Naeto C.

Other artistes like Elveektor, Chucky P, Khenyzee, Deoceezy and Celia also performed their songs, while DJ Melody was on-hand to charge the atmosphere with trending music from all genres.

Artfully compered by Chime Francis and expertly planned by Blessing Amodu of Able Company, an events management and ushering company, the concert had the sponsorship of Mr Kingsley Udeh, the Chief Executive Officer of Momentum Gadgets, a gadget company that Chidey is an ambassador for.

Some guests in attendance, including some expatriates, appreciated the performances, especially with the infusion of rock music.

Music is the divine way to tell beautiful, poetic things to the heart —Pablo Casals