Music is the divine way to tell beautiful, poetic things to the heart —Pablo Casals 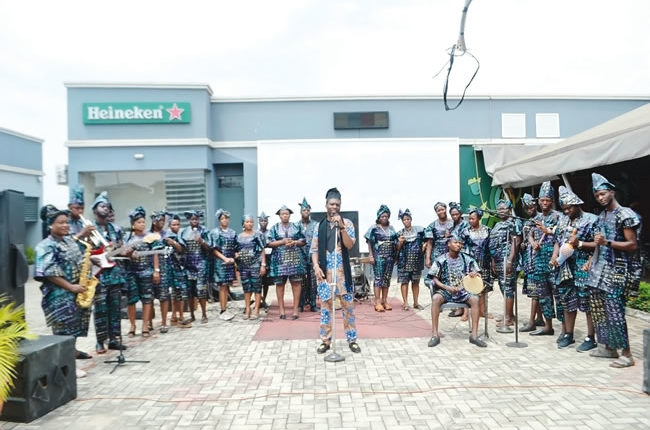 This speaks of how talented artiste, Paul and Ceecee Oniya Gospel Music group and his band crew are, who have thrilled many with their brand of music reflecting Yoruba’s unique cultural background in terms of dressing, etiquette, dance, and a showcase of talent, especially in their newly-released song track, entitled, “Oba Ni Jesu” in their album entitled, “Yoruba is my Cultural Heritage”

Paul and Ceecee Oniya Gospel Music Group, a Nigerian recording artiste, stage performer per excellence, prolific dance, content creator/coach, songwriter, and entrepreneur, Cultural interpreter in music with their lead artist named: Omotayo Paul Oniya, is well known for his reputed tantalizing music for their fans with great indigenous music, including Yoruba cultural riddles and poems through song interpretation, as this group resonates with people, their fans on live stage performance of deep cultural intellect, taking their audience to old memory lane of good wise words in form of cultural parables in songs.

“I was fortunate enough to attend their live stage performance more than twice, one of which I remembered vividly was at Ogba, area of Lagos State, Nigeria it was an unforgettable good memory,” he added.

As an indigenous and promoter of Yoruba folklore music, the versatile songwriter, Oniya started his music career with “Sacrifices of Praise” which circulated worldwide on all music platforms and was also known as OLD4C on the visual platform at a very early age, a group comprising about 13 active members including the vocalist, backup singers, stage dancers, percussionists, and other instrumentalists.

He is also a lyricist content creator in his rights, encompassed with depth delivery of his poetic cultural messages through Gospel platforms such as church anniversary events, and musical concerts to mention but few.

“Sisi Eko” was a musical impression that depicts the rich culture of the Yoruba clan and won Paul and Ceecee Oniya Gospel Music Group numerous fans based both within and outside of the shores of Nigeria. The commercial success of the latest hit single called” Love Birds” has gained more than 10,000 viewers on their YouTube page.

The latest single dropped hit tracks entitled, “Forgiveness” was coined and composed in Yoruba Cultural textures version of indigenous music, craftily fused with Fuji and Apala vibes. Paul and Ceecee Oniya Music Group have continued to redefine what indigenous music is and has attracted the global world to their sounds.

Paul and Ceecee Oniya Gospel Music Group and their crew in their bid to export their culturally unique style of music to the world stage of music global dominant music airwave, and most importantly for the love of all of their teeming fans in the western world, the group decide to infuse their latest work of art, a Yoruba afro-cultural/ Gospel rap is their latest Genre.

The cultural uniqueness of Paul and Ceecee Oniya Gospel Music Group has transformed their music into a huge cult following where their fans across the globe who are highly fascinated and dedicated to the work of culture, continue to create their dance step routines following the cultural video dancing steps and uploading them on all social media platforms for their fans to follow suit and also as a competitive challenge for others to learn from.

The music group has maintained a very strong consistency from 2019 to date and they have performed and collaborated with notable Nigerian musicians like Monic, Yetunde Zion Are, Ambassador Segun Nabi, Biyi Samuel, Funke Ilori, and Mukaila Ayinla to mention a few.