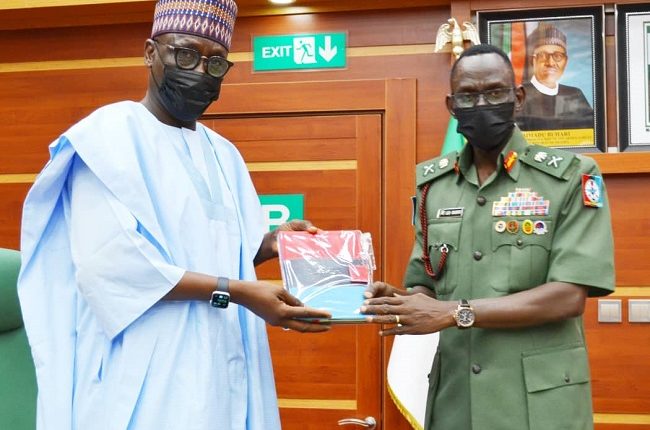 The Chief of Defence Staff (CDS), Major General Lucky Irabor, on Wednesday, expressed the commitment of the Armed Forces of Nigeria (AFN) towards supporting the Nigerian National Petroleum Corporation (NNPC), in the protection of the Corporation’s critical national assets and operational personnel spread across the country against criminality within the oil sector.

The CDS gave the assurance while playing host to the Group Managing Director (GMD), NNPC, Mallam Mele Kyari, who was on an official visit to the Defence Headquarters (DHQ), Abuja.

The CDS noted that the AFN and NNPC have over the years had long-standing engagements with respect to the protection of critical national assets and infrastructure.

Gen Irabor added that the relationship between the two agencies of government would be advanced further with the visit to the Corporation’s GMD.

While highlighting the operational benefits of NNPC to the sustenance of the nation’s economy, the CDS disclosed that the AFN under his leadership would cooperate fully with the NNPC management towards providing the necessary framework that would enable military support NNPC to operate optimally.

The NNPC boss had earlier reiterated that the Corporation would continue to seek the support and assistance of the AFN in order to protect its critical national assets and personnel across the country against oil theft, pipeline vandalism, economic sabotage and other sundry crimes.

Mallam Kyari who congratulated the CDS and the Service Chiefs on their recent appointment, described the development as a turning point and new vista of opportunities for the NNPC and AFN.

He assured that Corporation would further engage with the AFN in order to further enhance the security of critical national assets for the economic wellbeing of the country.

The last time Nigeria recorded such a low figure was in the December 27 to January 2 week, when it reported 5,681 cases…CDS pledges Armed Forces support to NNPC