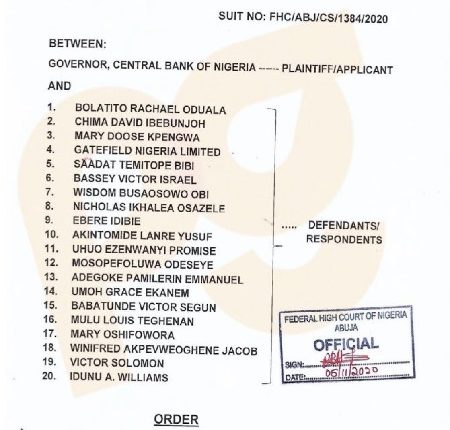 A federal high court in Abuja has granted the request of the Central Bank of Nigeria to freeze the accounts of 19 individuals and a public affairs company linked to the #EndSARS protests,  according to a People’s Gazette report on Friday.

The request, granted by Justice Ahmed Mohammed, was filed by the CBN on October 20.

The court order addressed to the head offices of Access Bank, Fidelity Bank, First Bank Nigeria, Guaranty Trust Bank, United Bank of Africa, and Zenith Bank, directed the banks to freeze forthwith all transactions on the 20 accounts on the list annexed to the CBN’s application as Exhibit A and all other bank accounts of the defendants/respondents for a period of 180 days pending the outcome of investigation and inquiry currently being conducted by the Central Bank of Nigeria.