Buratai briefs Buhari on progress of war against Boko Haram 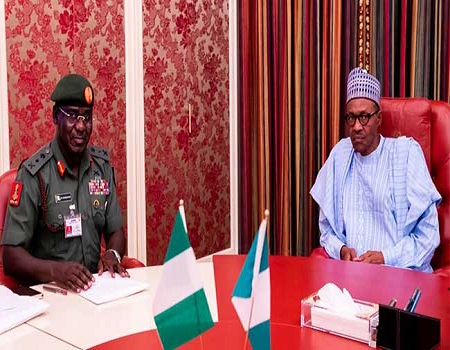 The Chief of Army Staff, General Tukur Buratai, has briefed President Muhammadu Buhari on the progress of the war against Boko Haram insurgents in the North-East.

Speaking to State House correspondents after meeting with the president, in Abuja, on Monday, he said tremendous success has been recorded in the ongoing fight, noting that 1429 insurgents have been neutralised, with 116 of their associates arrested.

He said: “The troops are putting in their best and that has resulted in the tremendous successes we are recording. The fight is still ongoing and over 1429 of this Boko Haram terrorists have been neutralised and we have arrested over 166 Boko Haram terrorist informants, their spies, couriers on logistics and their coordinators in the villages, the towns and even the forest.

“So, this is a tremendous achievement, our intelligence corps along with the Department of State Services and of course our good friends the Civilian Joint Task Force (CJTF) have worked very hard to see that this is achieved and I assure you that things will continue to improve as the days go by.”

The Chief of Army Staff, who has been at the theatre of war in the North-East for the past two months, said he was in the State House to personally brief the President on how it went while he was at the war front, adding that the President was pleased with the performance of the country’s military.

He further said: “I came in from the North-East just a day ago and it behoves on me to brief the President on what transpired there during the two months I stayed there. I have given him details of what the troops are doing and what we have achieved as well as what we intend to achieve in the nearest future.

“So far so good, even before I came, the President has been getting reports on what is happening in the North-East. So, with this brief that I gave him this morning, is further confirmation of what he has been receiving and so far, so good, he is impressed with the performance of the troops in the North-East and the effort put in so far has paid off.

“We will continue to deal with the situation, not only in the North-East but all other parts of the country. Tremendous success has been achieved and we are very happy with what is going on,” he pledged.

General Buratai noted that the morale of the troops in the trenches is very high at the moment, adding that their loyalty and commitment is not in doubt.

He added: “Surely you will agree with me that the troops’ morale is very high; it is something of trust, something of confidence, and something that will raise the spirit of any officer or soldier when he sees his Chief of Army Staff in the trenches along with him.

“This has raised the morale of the troops and has also made them put in their best and that is what has resulted in us doing so well and it’s still ongoing,” he said.

“Surely military operations are carried out with a plan and the overall plan is to rid the whole of the North-West and other emerging threats that are coming up in other parts of the country especially the North-Central and some areas that hitherto have been quiet. We will continue to tackle any form of insecurity that is emerging in collaboration with all other security agencies and our colleagues in the Navy and the Airforce.

Buratai praised the effort and loyalty of officers and men of the Nigerian Army, adding that he will soon go back to be with them.

“We have very loyal and courageous officers and soldier while on the battlefield, so I am very much impressed and happy with my officers and soldiers. This is to show the level of morale that they had while I was there and I will continue to be with them, to raise their morale,” he declared.