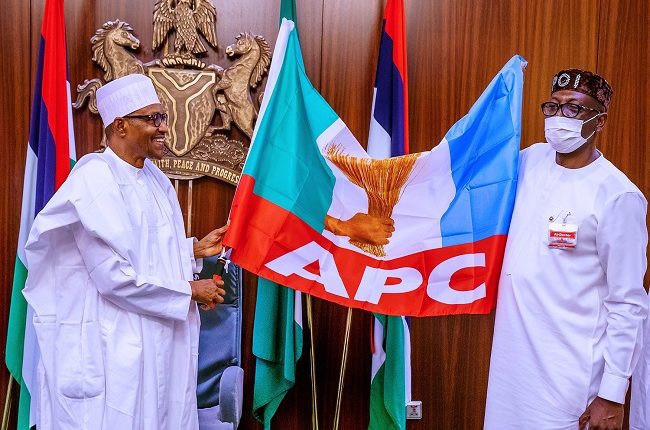 The candidate of the All Progressive Congress (APC) in the September 19 governorship election, Pastor Osagie Ize-Iyamu, has secured the endorsement of President Muhammadu Buhari following a meeting at the presidential villa, Abuja on Friday.

The Chairman of the APC National Caretaker/Extraordinary National Convention Committee and Governor of Yobe state, Mai Mala Buni disclosed this to correspondents after the meeting.

He also said that former National Chairman of the APC, Comrade Adams Oshiomhole, is not the face of his campaign, noting that it is the Peoples Democratic Party (PDP) that is dragging the former Edo governor into the fray.

Ize-Iyamu blamed Governor Godwin Obaseki for the rising political tension in the state, saying that as one who does not have immunity, he will not make trouble because “I don’t want to go to jail .”

Social Investment Fund: Reps Summon Adeosun, Ahmed, Farouq, Others Over N1.7trn Allocation
FORMER Minister of Finance, Mrs Kemi Adeosun and the incumbent Minister of Finance, Budget and National Planning, Mrs Zainab Ahmed, are expected to appear before the House of Representatives over N1.7 trillion appropriated for the implementation of National Social Investment Programme (NSIP) from 2016 to September 2019. Also expected to appear is the Minister of Humanitarian Affairs, Disaster Management and Social Development, Sadiya Umar Farouq; incumbent and former permanent secretaries, desk officers involved in the implementation of the programmes in both ministries as well as the National Social Investment Office…Buhari endorses Ize-Iyamu

PTF Extends Phase Two Eased Lockdown By Four Weeks
The Presidential Task Force on COVID-19 has extended the current phase two eased lockdown by another four weeks. The phase started on June 1, 2020. The extension followed the approval of recommendations made by the PTF to President Muhammadu Buhari. The Chairman of the task force and Secretary to Federal Government of the Federation (SGF), Mr Boss Mustapha, stated this at Thursday’s press briefing in Abuja. saying that there are however some amendments to the phase…Buhari endorses Ize-Iyamu Buhari endorses Ize-Iyamu

SEE THE APPOINTMENT LETTER: Bauchi Governor Gets SA On Unmarried Women Affairs
In a resolve to monitor and regulate the activities of single ladies in the state, Bauchi State Governor, Senator Bala Mohammed Abdulkadir has appointed Balaraba Ibrahim as his Special Assistant (SA) on Unmarried Women Affairs. The appointment of the SA was contained in a letter signed by the Secretary to the State Government, Mohammed Sabiu Baba copies of which was made available to journalists in Bauchi on Thursday…Buhari endorses Ize-Iyamu