In a resolve to monitor and regulate the activities of single ladies in the state, Bauchi State Governor, Senator Bala Mohammed Abdulkadir has appointed Balaraba Ibrahim as his Special Assistant (SA) on Unmarried Women Affairs.

The appointment of the SA was contained in a letter signed by the Secretary to the State Government, Mohammed Sabiu Baba copies of which was made available to journalists in Bauchi on Thursday.

According to the appointment letter signed by the SSG, Mrs Balaraba Ibrahim is to assist the Governor on matters of single ladies based on her knowledge, experience and personal qualities.

The letter reads: “The appointment is based on your knowledge, experience and personal qualities of hard work, honesty and absolute loyalty.”

The SSG then charged the newly appointed Special Assistant on Unmarried Women Affairs to utilise all her qualities in facing the challenges of her office in order to facilitate the attainment of the government’s collective goal and the expectation of the electorates.

He stated that, “The terms and conditions of your appointment are as enunciated in the relevant government policies as applicable.”

The letter of appointment concluded that, “While congratulating you on this well-deserved appointment, I pray to the almighty God to guide and protect you in the discharge of the responsibilities of your new office. The appointment takes immediate effect, please.” 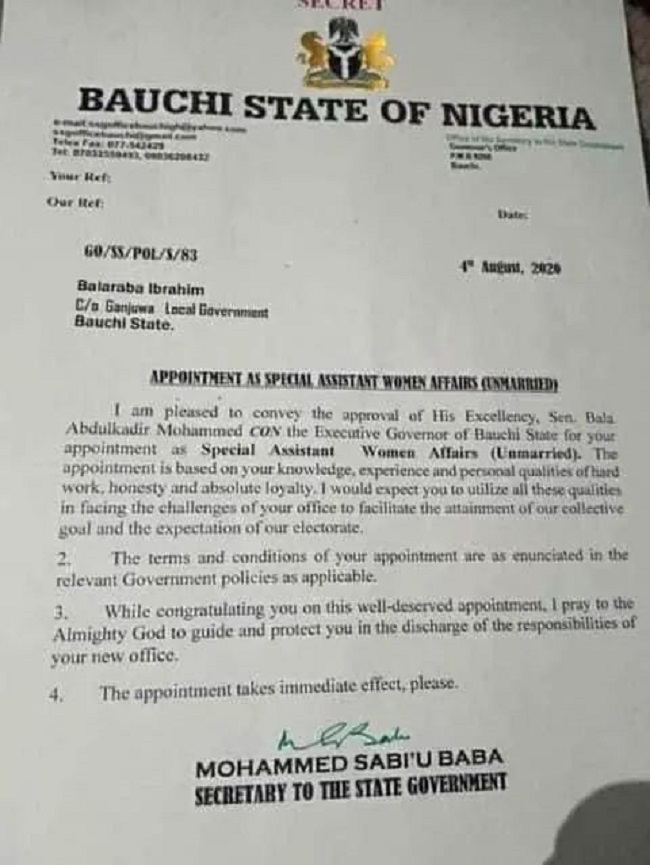